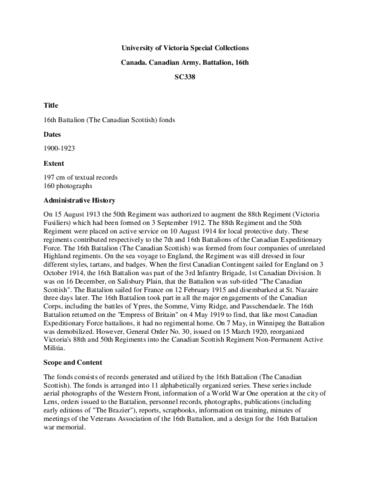 On 15 August 1913 the 50th Regiment was authorized to augment the 88th Regiment (Victoria Fusiliers) which had been formed on 3 September 1912. The 88th Regiment and the 50th Regiment were placed on active service on 10 August 1914 for local protective duty. These regiments contributed respectively to the 7th and 16th Battalions of the Canadian Expeditionary Force. The 16th Battalion (The Canadian Scottish) was formed from four companies of unrelated Highland regiments. On the sea voyage to England, the Regiment was still dressed in four different styles, tartans, and badges. When the first Canadian Contingent sailed for England on 3 October 1914, the 16th Battalion was part of the 3rd Infantry Brigade, 1st Canadian Division. It was on 16 December, on Salisbury Plain, that the Battalion was sub-titled "The Canadian Scottish". The Battalion sailed for France on 12 February 1915 and disembarked at St. Nazaire three days later. The 16th Battalion took part in all the major engagements of the Canadian Corps, including the battles of Ypres, the Somme, Vimy Ridge, and Passchendaele. The 16th Battalion returned on the "Empress of Britain" on 4 May 1919 to find, that like most Canadian Expeditionary Force battalions, it had no regimental home. On 7 May, in Winnipeg the Battalion was demobilized. However, General Order No. 30, issued on 15 March 1920, reorganized Victoria's 88th and 50th Regiments into the Canadian Scottish Regiment Non-Permanent Active Militia.

Transferred to UVic Special Collections from BC Archives, March 2006.