James Hanley was a novelist deemed by many to be “one of the great neglected writers of the twentieth centuary". He was Irish by background and, although brought up in Liverpool, he lived for many years in North Wales and came to consider himself Welsh.

Saul Bellow is an American writer.

Alfred Bergan was a resident of Dublin, Ireland. He is mentioned in both "Ulysses" and "Finnegan's Wake" by James Joyce. He worked as a Sub-Sheriff's Assistant. 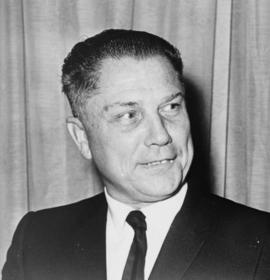 Jimmy Hoffa was a U.S. union leader. In 1952 he was elected an international vice president of the Teamsters Union, and in 1957 he became international president. Starting in 1957, Hoffa was the subject of government investigations which led to his imprisionment in federal prison in 1967. He retained presidency of the Teamsters. President Nixon commuted Hoffa's sentence in 1971. Hoffa disappeared in July 1975 and was declared legally dead in 1983.

International Brotherhood of Teamsters, Chauffeurs, Warehousemen, and Helpers of America

Ed Dorn is an American writer. He is associated with the Black Mountain School of poetry and was greatly influenced by Charles Olsen.