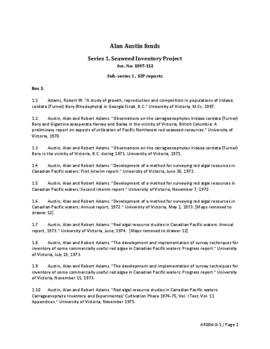 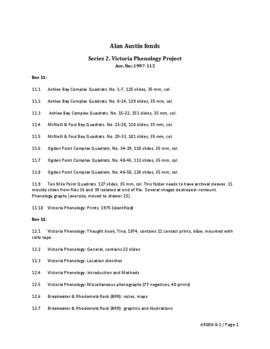 Alan Austin was born on August 14, 1932 in Pentre, Rhondda Wales. He was a faculty member in the Department of Biology at the University of Victoria from 1964-1997. Austin was a phycologist - a specialist in marine and freshwater algal vegetation. He was involved in two major research projects: Victoria Phenology Project, 1964-1986, and the Seaweed Inventory Project (SIP), 1969-1978. The SIP launched a substantial, and very rare, pre-utilization survey of the seaweed along BC coastal waters, and produced detailed vegetation maps previously unavailable. A major proportion of the day to day research was conducted by Robert Adams, Austin's research assistant and colleague. The data from the SIP was used by the BC Commercial Fisheries Branch (later the Ministry of the Environment) to assess the feasibility of commercially harvesting British Columbia's rich marine resources. Alan Austin died in Victoria, BC on September 29, 2009.

All SIP materials were arranged into Series 1, with sub-series for Series 1-4 in the previous arrangement.