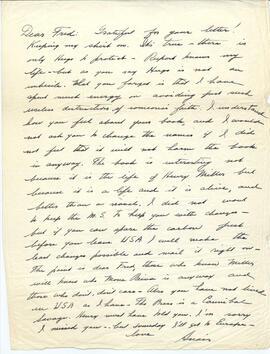 Alfred Perlès was born in Vienna to Czech parents. He was a writer who lived for many years in the literary circles of Paris, associating with writers such as Henry Miller and Lawrence Durrell. While in Paris, he published a magazine called "The Booster", which contained excerpts from the work of Miller, Durrell, and Anais Nin. One of his main claims to fame may be that he was the model for the character of "Carl", who figures in several of Miller's early autobiographical novels. Perlès moved to England in around 1939 and later became a British citizen. He changed his last name to Barret in later life. Perlès works include "My Friend Henry Miller", "Art and Outrage" (with Durrell), "A Correspondence About Henry Miller" (consisting of letters between Perlès and Lawrence Durrell), and "Scenes from a Floating Life" (autobiography).