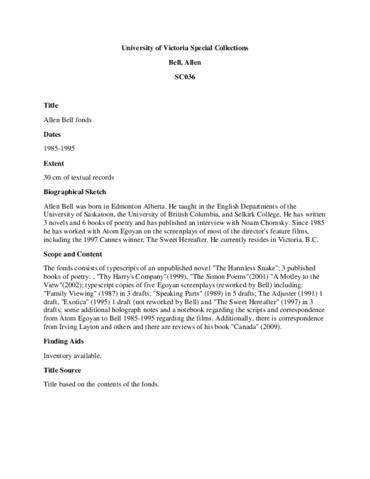 Allen Bell was born in Edmonton Alberta. He taught in the English Departments of the University of Saskatoon, the University of British Columbia, and Selkirk College. He has written 3 novels and 4 poetry manuscripts. Since 1985 he has worked with Atom Egoyan on the screenplays of most of the director's feature films, including the 1997 Cannes winner, The Sweet Hereafter. He currently resides in Victoria, B.C.

Poetry mss. and novel ms. by Mr. Bell to be used only with Mr. Bell's permission. Unrestricted access to copies of the screenplays, but photocopies of screenplays subject to Mr. Bell's approval.

Atom Egoyan has given his personal papers to the Film Reference Library, a division of the Toronto International Festival group.