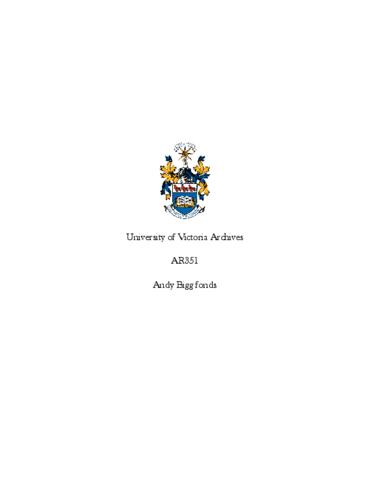 Andy Bigg was born in Brighton, England in 1915, and later entered the newspaper industry on Fleet Street, specializing in promotion and photojournalism. In 1938, Andy and Irene Bigg were married and later had three children: Carol, Michael, and Pamela. In 1948, the Bigg family emigrated to the interior of British Columbia (Wilsons Landing, Christina Lake) where Bigg worked in a variety of jobs in logging and construction. He finally got a permanent job at the BC Cement Company at Bamberton and began publishing the Western Advocate in his spare time. In 1960, he became editor of the West Coast Advocate in Port Alberni, then production manager of the Twin Cities Times, and continued his interest in photography. In 1966, Bigg moved to Duncan to publish his own newspaper, The Cowichan Pictorial, 1966-69. He then purchased the Cowichan Leader and ran it until his retirement in 1979. From 1948 to 1994, Bigg wrote plays, poetry, stories, and many drafts of his autobiography, focusing on his familys experience of emigration and life in British Columbia.