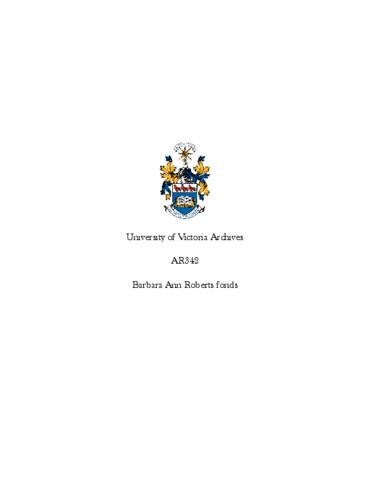 Barbara Ann Roberts (1941-1998) was born in Riverside, California, on September 22, 1941, the daughter of Paul Roberts, a physician, and Charlotte (Bowman) Roberts, a Canadian who met her husband when he was studying medicine at McGill University. Roberts married at seventeen, had various jobs in California and in 1970, immigrated with her two sons, Michael and David Hoffman, to Canada.

She studied at Simon Fraser University, receiving her B.A. in 1972 and her M.A. in history in 1976. From 1974 to 1977, she was an instructor in history at Cariboo College, Kamloops. In 1980, she received her PhD in history from the University of Ottawa. Her thesis, "Purely administrative proceedings: a study of the management of deportation 1900-35", was published as Whence they Came: deportation from Canada, 1900 -1935, University of Ottawa Press, 1988. In addition to her academic work, during these years she worked as a researcher and writer for the Museum of Man, wrote brochures for the Department of Indian and Northern Affairs and researched, wrote, and co-directed film strips on immigration for the National Film Board of Canada.

For the following three years, she did not hold a full time academic appointment and was very involved with work in the peace and women's movements. In July 1985, she was "one of the
co-ordinators of the Peace Tent at the NGO Forum in Nairobi, Kenya, which marked the end of the U.N. Decade for Women; the Peace Tent, organized by the international NGO Women’s International for Peace and Food, in conjunction with the Women’s International League for Peace and Freedom, provided nine days of presentations, discussions, and opportunities for women to speak out and make connections of those of like mind." She had moved to Halifax before going to Nairobi, and in August of 1985, she, with others who had been involved with the Peace Tent, formed a group in Halifax and "obtained a Secretary of State Women's Program grant and produced a slide and audiotape show about the Nairobi forum, the Decade, and their relation to women's issues in Canada, which we showed to women's groups in the province." With others, she participated in international peace networks, developed the idea of an international peace university, Ovum Pacis, and created an internal Quaker group, "Friendly Nuisances". In 1986, the Halifax group obtained a grant "to educate women's groups across the province about how they could use the Canadian government's adoption of international agreements on women's equality to get action on their issues." [quotations are from a letter from Roberts to the Acting Dean of Arts, University of New Brunswick, 27 March 1994, box 1.4] As co-ordinator and outreach worker on this project, she "developed the leaflet 'Promises to Keep'".

In 1986, Roberts was a Summer Lecturer in the Department of Education, Dalhousie University. From October to November, 1986, she was on a Visiting Lecture Tour, International Scholars Programme of the Finnish Academy, and the University Women Researchers groups of Jyvaskyla, Tampere, Turko, and Helsinki Universities.

Roberts took early retirement from Athabasca University in late 1997 after being diagnosed with cancer. In June, 1998, she and her husband moved to Victoria where she died on June 22.

Her research interests were focussed on women's history, women and work, women immigrants and their particular difficulties, violence against women, the peace movement and women in the peace movement. She also gave talks on and published articles on distance education. In the mid 1980s, she began her research on Gertrude (Twilley) Richardson, a feminist and pacifist who emigrated from England to Northern Manitoba before the First World War. During the later l980s, she also researched Canadian women peace activists and carried out a number of oral history interviews, mainly in 1988. In the early 1990s, she carried out research on the Leicester Peace Society. Her final research project was for a projected book comparing Australian and Canadian women peace activists in the First World War.