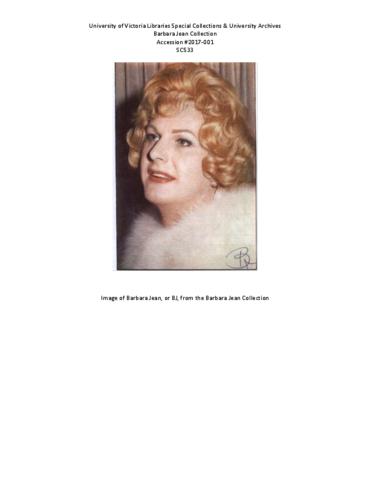 Barbara Jean was the feminine persona, or second self, of Robert Burman (1926-2014), a Southern California architect. Barbara Jean was an active member of the transvestite community in the 1950s and 1960s. She created approximately 300 original drawings from the 1930s to the 1960s, in the genre of “petticoat punishment,” which she continued to elaborate upon throughout her life; Barbara Jean signed her works “BJ.”
Barbara Jean sold her art to publications and retained the originals; crossdressing publications throughout the 1960s featured her work including: Fated for Femininity (1962), Transvestia (1960 onwards), The Transvestite and His Wife (1967), The American Crossdresser (undated), and Turnabout (1963), as well as dozens of other underground publications devoted to the genre. Barbara Jean collaborated with Howard Bardol, also known by the feminine persona Nan Gilbert or Nancy; Barbara Jean created illustrations based on Nancy’s photographs. The collection contains drawings, notes and photographs they exchanged.

Material was acquired from Barbara Jean by a collector over an approximate 20 year period.

Donated in 2017 to Special Collections & University Archives by an anonymous collector.

Arrangement as received from the donor.