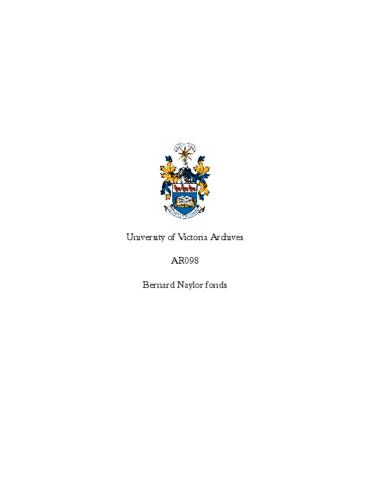 Bernard James Naylor was born in Cambridge, England 22 November 1907. His father, Edward Woodall Naylor, and grandfather, John Naylor, were both organists and composers. Bernard Naylor was an organ scholar at Exeter College, Oxford, and studied composition with Gustav Holst and others. He graduated from Oxford with a Bachelor of Music degree in 1930. In 1932 he came to Winnipeg where he conducted the Winnipeg Symphony Orchestra and various choirs. He returned to England in 1936 and was appointed Organist and Director of Music at Queens College, Oxford. Naylor married Dorothy Crerar in 1940 and from 1942 to 1947 conducted the Little Symphony Orchestra in Montreal. After returning again to England to teach, he settled permanently in Canada in 1949, devoting most of his time thereafter to composing. In 1968, the Naylor’s moved from Winnipeg to Victoria. In 1980, Naylor was awarded two honorary LLD degrees from the University of Manitoba and the University of Winnipeg. Naylor died 19 May 1986.