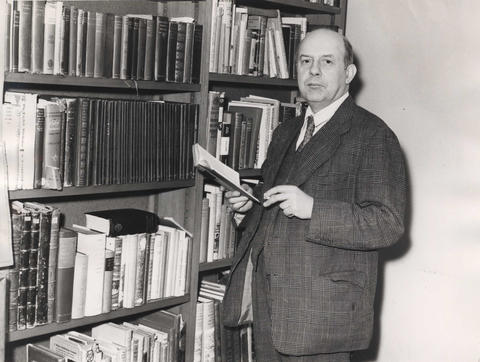 John Betjeman was a poet, journalist, free-lance writer, architectural commentator, broadcaster, and television personality who was popular in England in the 1960s and 1970s and was active in the campaigning for the preservation of churches, buildings and landscape. He was knighted in 1969 and became poet laureate in 1972. During his time at Oxford University, Betjeman's active social life included writers such as Evelyn Waugh, Bryan Guiness, Graham Greene, and W.H. Auden. He married Penelope Chetwood in 1933; and travelled extensively in Europe, North America and the Middle East between 1948 and 1975 giving lectures, slide shows and readings. He was an officer and patron of more than 40 organizations, including Royal Commissions of Fine Art and of Historic Monuments. With all his public exposure, he became Britain's most popular poet by 1962, when his "Collected Poems" sold more than 100,000 copies. His poetry publisher throughout most of his career was John Murray.

is the associate of

John Betjeman served on the Board of Directors of Grand Opera Productions Ltd.

is the associate of

is the cousin of

Elsie Avril was a cousin of John Betjeman's father.