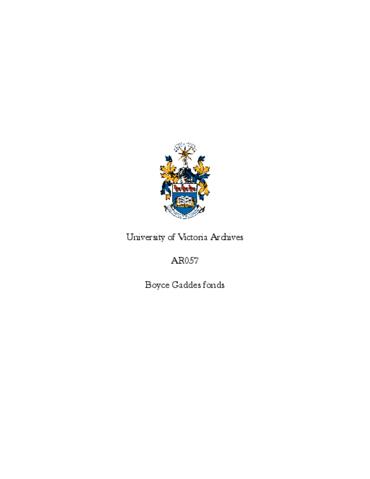 30 cm of textual records and other material

Donald Boyce Gaddes was born on October 10, 1912 in Kelowna, B.C. He attended elementary and high schools in Vancouver and Kelowna from 1919 to 1930 and was taught piano privately by his older sister and several piano teachers. By the time he had graduated high school in 1930 he decided to pursue music as a career.

In 1934 he received his Associate Diploma in piano teaching from the Toronto Conservatory of Music and that year established a teaching studio in Union Theological College at U.B.C. The following year he began his B.A. at U.B.C., subsequently attending Vancouver Normal School in 1937-38. Gaddes later managed to delay his military service in order to complete a B.Mus. in theory and composition from the University of Oregon in 1942. After several years of teaching, he completed his Master's degree in composition from the University of Washington in 1955.

During the War Gaddes served in the R.C.A.F. as a radar mechanic. Following the War he spent a brief period as a teacher of English and Mathematics in a Vancouver high school and then in the summer of 1946 secured a position with the Victoria Normal School. Gaddes continued teaching music at the Normal School until it merged with Victoria College in 1956; he played an integral part in the formation of the music curriculum during these years. In addition to his teaching responsibilities he found time to participate in a variety of musical performances in the community and composed several musical arrangements (included in the accession).

With the amalgamation of the Victoria Normal School and Victoria College, Gaddes resumed his teaching responsibilities and continued to develop his curriculum, until he left U.Vic., at the then-new Gordon Head Campus, in 1967. From 1967 to 1974 he was an Intermediate Supervisor and then Director of Instruction in Campbell River and Courtney, at which time he retired to Victoria. He died 17 June 2012.