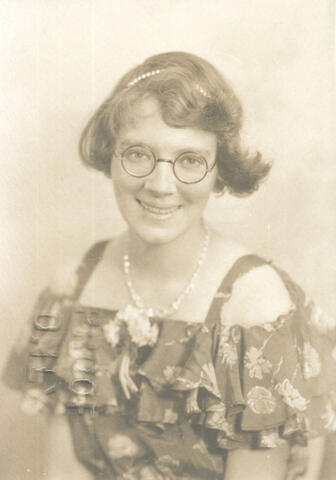 Audrey Alexandra Brown was born in Nanaimo, B.C. on October 29th, 1904 to Joseph Miller Brown, a Nanaimo pioneer watchmaker and amateur historian, and Rosa Elizabeth nee Rumming. She was fifth in a family of 8. She was educated at St Ann's Convent Nanaimo, April 1912-September 1913 and at Nanaimo Public School March 1915-February 1917. She was a very keen reader and largely educated herself. She wrote her first verse at the age of 6. In May 1927 she was attacked by rheumatic fever and rendered unable to walk. She was taken into treatment at Queen Alexandra Solarium (Mill Bay) November 1934, operated on, and discharged able to walk, 1935. Brown was "discovered" in 1928 by Professor Pelham Edgar of Victoria College (Toronto) who promoted her career from 1928 to 1939. Between 1931 and 1948 she published 5 books of poems: A Dryad in Nanaimo (1931), A Dryad in Nanaimo with 11 New Poems (1934), The Tree of Resurrection (1937), Challenge to Time and Death (1943) all with Macmillan's Canada, and All Fools Day (1948) with Ryerson Press. In 1937 she published her only prose work, The Log of the Lame Duck (1937) about her hospital experience. In addition to this Ms. Brown published some of her poetry in newspapers and journals. From 1926 on Audrey Brown published first poetry and later prose in newspapers. As a freelance journalist she published the columns "Remember With Me" and "What Do You Think?" under the pseudonym "the Khoji" in the Nanaimo Free Press (1969-1974). Former Prime Minister Robert Borden admired her poem "Laodamia" and corresponded with her from 1934 until his death in 1937. She was also admired by and corresponded with Lorne Pierce intermittently from 1931 to 1960. Audrey received many awards: the Members Memorial Medal of the Canadian Women's Press Club (1936), the Lorne Pierce Gold Medal and the Royal Society of Canada (1944), the Order of Canada (Officer) (1968), and the Centennial Silver Medal (1967). She had honorary memberships in a number of women's clubs, was a member of the Canadian Authors Association (1948) and visited England (June-December 1950) as guest of P.E.N.