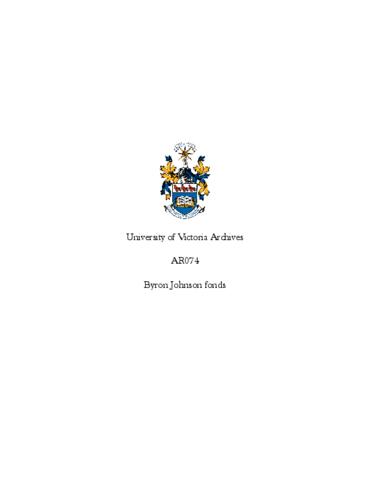 Byron Ingemar Johnson was born in Victoria, B.C., on 10 December 1891, the son of Icelandic parents Oliver and Gudren Finson Johnson. He attended high school in Victoria and then went to work for the Tyee Copper Company (a food company at that time) as a clerk-stenographer. Johnson was also an excellent athlete. He played inter-city lacrosse for six years, did a brief professional tour with the Vancouver Lacrosse Club in 1913, and later became a Commissioner of lacrosse. During the World War, 1914-1918, he served in the British Army Field Ambulance Corps, the Mechanical Transport Division, and the Royal Flying Corps. On 29 June 1920 he married Kate Simpson and they had one son, Byron Jr., born in 1926.

After the war, Byron and his brother John established Johnson Brothers, a successful Victoria trucking and supply business. In 1930, they amalgamated with Evans, Coleman & Gilley Brothers (later Evans, Coleman & Johnson, then Evans, Coleman & Evans). Byron Johnson moved to New Westminster to assume the position of General Manager and subsequently became Vice-President and President of the company and its various subsidiaries. Eventually he became a director of the B.C. Power Corporation.

In November 1933 Johnson was elected Liberal MLA for Victoria under the T.D. Pattullo government, but was defeated in the same riding in May 1937. During the World War, 1939-1945, Johnson was appointed technical adviser to the Royal Canadian Air Force (RCAF) and supervised the construction of airbases in western Canada. For this he received the Order of the British Empire (OBE). The death of A. Wells Gray, MLA for New Westminster, created a vacancy in 1945, and in May of that year Johnson won the by-election as a Coalition candidate under Premier John Hart. In the fall a general election was called and Johnson was re-elected. On 10 December 1947, he defeated G.S. Wismer and was elected B.C. Liberal Party leader, relinquishing all of his business interests to become Premier. In the 15 June 1949 election he led the Coalition government to a majority victory, but while he was in Quebec attending a federal-provincial conference in September 1950, Johnson was involved in a serious automobile accident from which he never fully recovered. The Coalition fell apart early in 1952 and in the July election Johnson lost his New Westminster riding; the Liberal Party won only six seats in the legislature, the CCF eighteen, and the Social credit nineteen. Johnson recommended W.A.C. Bennett, leader of the Social Credit, as Premier.

In political retirement Johnson remained active, campaigning in the Victoria by-election of 1953, and answering Socred criticism of his administration. He returned to Evans, Coleman and Evans, but in April 1955, Johnson suffered a severe stroke. He died in Victoria on 12 January 1964.