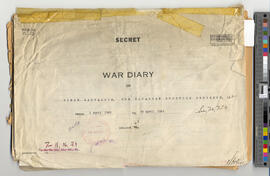 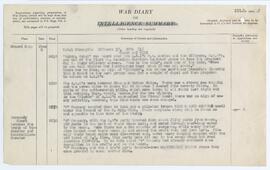 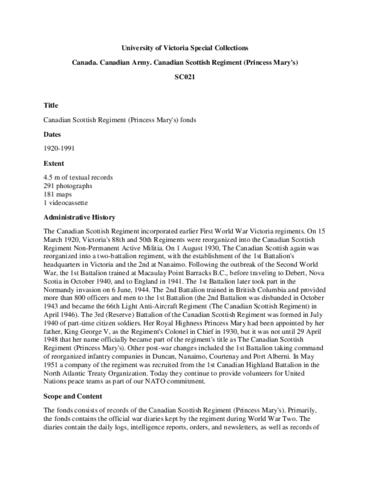 4.5 m of textual records and other material

The Canadian Scottish Regiment was formed on 2 September 1914 at Valcartier, Quebec as the 16th Battalion, Canadian Expeditionary Force (C.E.F.). The Regiment was composed of four Canadian Highland battalions: the 50th Regiment (Gordon Highlanders) of Victoria; the 72nd Seaforth Highlanders of Vancouver; the 79th Cameron Highlanders of Winnipeg; and the 91st Argyll & Sutherlands of Hamilton. Under the commands of Lt Cols. R.G.E. Leckie and C.W. Peck, the 16th Battalion, Canadian Scottish, acquitted itself with distinction at Ypres, Vimy, the Somme, Amiens and in many other engagements during the First World War.

After the war, the Canadian Army reverted to a small Permanent Force and a larger Non Permanent Active Militia (N.P.A.M.). On 15 March 1920 (by General Order No. 30), the Canadian Scottish Regiment became part of the N.P.A.M. The regiment came under the command of Military District No. XI and the Bay Street Armoury in Victoria was made the regimental headquarters.

The new regiment consisted of one active battalion, designated the 1st Bn., Canadian Scottish. This battalion perpetuated elements of the 16th Bn., C.E.F. notably the 50th Gordon Highlanders of Victoria.1 Later, in 1930, a second active battalion was raised. Perpetuating the 88th Regiment (Victoria Fusiliers), the 2nd Bn., Canadian Scottish, was known as the regiment's "rural" battalion. It consisted of a headquarters company (based at Nanaimo) and four additional companies: "A" Company (with platoons at Shawnigan, Duncan, and Chemainus), "B" Company (Nanaimo), "C" Company (Courtenay) and "D" Company (with platoons at Metchosin, Saltspring Island, North and South Saanich).

At the outbreak of the Second World War, the Canadian Scottish Regiment was mobilized as part of the Canadian Active Service Force. The 1st and 2nd Battalions were sent overseas, where they played a distinguished role at Normandy, Caen, Falaise, and many other battles. A 3rd (Reserve) Battalion remained in British Columbia under the command of Lt Col. Stephenson during the conflict.

After the Second World War, the Canadian military was again reorganized. The new structure consisted of an Active Force and a Reserve Force (previously known as the N.P.A.M.). The Canadian Scottish Regiment became a part of the Reserve Force. Moreover, instead of the Military Districts which had existed since Confederation, the country was divided into "Commands." Each "Command" was subdivided into regional "Areas." After 1947, the Canadian Scottish Regiment in Victoria was subordinate to the British Columbia Area Headquarters in Vancouver which, in turn, reported to Western Command Headquarters in Edmonton.

At the same time, the regiment itself was altered drastically, being separated into infantry and artillery components. The infantry component consisted of the regiment's 1st Battalion which after 31 May 1948 was designated the Canadian Scottish Regiment (Princess Mary's).3 The regiment's 2nd battalion was converted to artillery and was designated the 66th Light Anti Aircraft Regiment (Canadian Scottish), R.C.A. The new artillery regiment consisted of a headquarters and three batteries viz. the 196th (located in Nanaimo), the 197th (authorized for Duncan and Chemainus) and the 198th (Port Alberni).

Further changes occured in 1955, when the 66th Light Anti Aircraft Regiment was converted back to infantry and was re amalgamated with the 1st Bn., Canadian Scottish Regiment (Princess Mary's). The reconstituted regiment then became a part of the Canadian Army (Militia), as the Reserve Force was termed. The newly reinforced militia regiment which again bore the name

THE CANADIAN SCOTTISH REGIMENT (PRINCESS MARY'S) was divided into several sub units, which were located at various points on Vancouver Island. The regiment's Headquarter's Company, Support Company, and "E" Company were stationed in Victoria; "A" Company was located in Duncan, "B" Company in Nanaimo, "C" Company in Courtenay, and "D" Company in Port Alberni. A Regimental Motor Platoon was located at Sidney.

Transferred to UVic Special Collections from BC Archives, March 2006.

The fonds consists of records of the Canadian Scottish Regiment (Princess Mary's). Primarily, the fonds contains the official war diaries kept by the regiment during World War Two. The diaries contain the daily logs, intelligence reports, orders, and newsletters, as well as records of individual experiences, of the 1st, 2nd, and 4th Battalions. A collection of maps and aerial photographs accompany these war diaries. The fonds also contains regimental records on training, dress regulations, personnel, the Bay Street Armoury, finances, and regimental correspondence. Additionally, the fonds includes the original manuscript and correspondence pertaining to historian Dr. Reginald Roy's book, "Ready for the Fray (Deas Gu Cath): the History of the Canadian Scottish Regiment (Princess Mary's) 1920-1955". Also included are the regimental publications, The Brazier, The Courtenay Camp Chronicle, and The Maple Leaf. The fonds is arranged into 22 alphabetically organized series consisting of records generated and utilized by the Canadian Scottish Regiment from its creation in 1920 to the present.