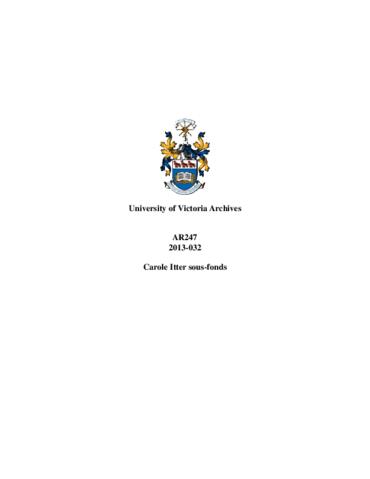 Carole Itter was born in Vancouver, British Columbia on September 29, 1939. She is an artist, writer, filmmaker, and educator. She attended the Vancouver School of Art in 1961, subsequently renamed the Emily Carr University of Art and Design, where she later became an instructor. She traveled and studied throughout Europe during the 1960's before settling in Vancouver's Strathcona neighbourhood. She had one daughter--Lara Gilbert, 1972-1995--with Vancouver poet Gerry Gilbert, who she lived with for approximately six years. The couple's relationship was emotionally and sexually abusive. Once separated they initially shared custody of Gilbert, and when Gilbert was 12 years old she requested to live with Itter full-time.

In 1978 Itter began to divide her time between her home in Strathcona and a North Vancouver shack occupied by her partner Al Neil, the late Vancouver artist and musician. They shared this shack, known as the Blue Cabin, until 2015. It was preserved when the land was sold, and now exists as the Blue Cabin Floating Artist Residency in the waters of False Creek.

Itter has held several exhibitions in Vancouver, frequently collaborating with Al Neil. Notable work and exhibitions include art piece "Personal Baggage" (1972), Rattles (Western Front, 1984), and WACK! Art and the Feminist Revolution (Vancouver Art Gallery, 2008). She has won two awards for visual art, the 1989 VIVA (Vancouver Institute of Visual Arts) Award and the 2017 Audain Prize in Visual Art. With Daphne Marlatt, Itter was co-editor of Opening Doors in Vancouver's East End: Strathcona (Harbour Publishing: 1979), an oral history of Strathcona. Her own writing has appeared in anthologies and literary magazines, including periodics, Brick, and Room of One's Own.

In 1992 Lara Gilbert disclosed that she had been sexually abused by her father and paternal grandfather. Despite Itter's own ensuing mental health struggles, she supported Gilbert throughout her final years. They attended joint therapy and filed an unsuccessful suit against Vancouver General Hospital for a sexual assault of Gilbert by an orderly. Gilbert died by suicide on October 7, 1995. Itter attempted to press charges against St. Paul's Hospital and staff for medical malpractice, but the filing was dropped in 2001.

Itter processed her grief through research, therapy, and art. Her sculptural installation "The Pink Room: A Visual Requiem" (grunt gallery, 2000) dealt with the impact of grief and loss. It was acquired by the Vancouver Art Gallery in 2007. Itter edited and published excerpts of Lara Gilbert's journals in the book I Might Be Nothing (Trafford Publishing: 2004).

Original order has been preserved. Several files are listed under the Lara Gilbert fonds.

Sous-fonds is open for research.