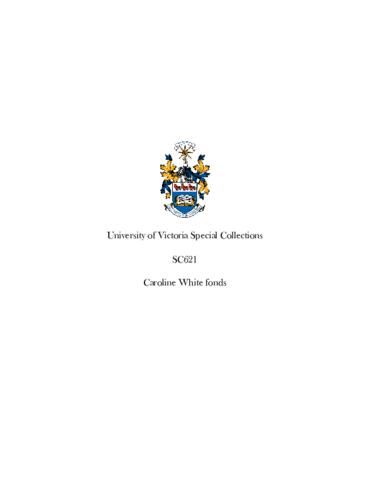 Caroline White is a community-based consultant focusing on decolonial, anti-racist, queer and trans anti-violence and social justice education and activism. Caroline lives on the traditional, ancestral, unceded territories of the xʷməθkʷəy̓əm (Musqueam), Sḵwx̱wú7mesh (Squamish), and Sel̓íl̓witulh (Tsleil-Waututh) Nations. In 1991 she began working as Education Coordinator at the Kitchener-Waterloo Sexual Assault Support Centre in Ontario where she instructed on male violence against women, dating violence, child sexual assault, sexual harassment, dissociation, anti-racism, and oppression. She became frustrated with heteronormative risk analysis used by sexual assault centres, which focused on violence against cisgendered women by cisgendered men, to the exclusion of other gender dynamics. In 1994 she initiated policies and training to support transgendered people who have experienced sexual and interpersonal violence.

In 2000, White became a member of the Trans Alliance Society and the Women/Trans Dialogue Planning Committee, a grassroots project out of Vancouver, B.C. to foster dialogue between transgendered people and trans-exclusionary women’s groups. The Committee arose in response to two controversies: Vancouver Rape Relief’s refusal to hire transwoman Kimberly Nixon and the subsequent Human Rights Tribunal hearing, and the inclusion of gender identity as grounds for discrimination under the BC Human Rights Code. It was through this Committee that White met Joshua Mira Goldberg, her frequent collaborator in articles and policy guides.

White received her M.A. in Educational Studies at the University of British Columbia in 2002, with her thesis titled Re/defining Gender and Sex: Education for Trans, Transsexual, and Intersex Access and Inclusion to Sexual Assault Centres and Transition Houses. Her research discovered that, contrary to common perceptions, many transition houses in British Columbia (45 out of 62 respondents to her questionnaire) are accessible to transgendered women in policy. Her writing has appeared in publications such as Intimate Violence in LGBTQ Lives (New York: Routledge, 2011), Trans/forming Feminisms (Toronto: Sumach Press, 2011), and Aid to Safety Assessment and Planning (ASAP) for Women Who Experience Violence in Their Relationships (Vancouver, BC: BC Institute Against Family Violence Society, 2006).

In 2005, White was employed by the Justice Institute of B.C. (JIBC) as Program Coordinator at the Centre for Leadership and Community Learning. She later became Program Director at the Centre for Counselling and Community Safety. She won the President’s Award at JIBC’s 2015 Awards of Excellence ceremony for her contributions towards their vision of “safer communities and a more just society.”

Caroline White's thesis is available through the University of British Columbia Library, Call number: AW5 .B71 2002-0603.