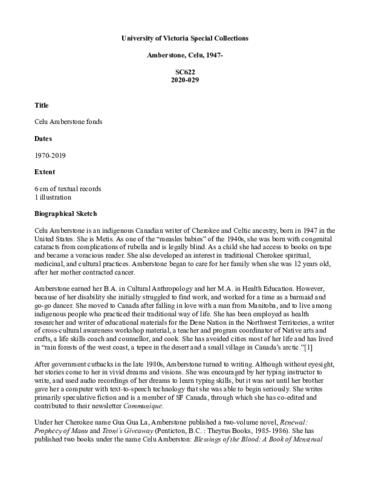 Celu Amberstone is an indigenous Canadian writer of Cherokee and Celtic ancestry, born in 1947 in the United States. She is Metis. As one of the “measles babies” of the 1940s, she was born with congenital cataracts from complications of rubella and is legally blind. As a child she had access to books on tape and became a voracious reader. She also developed an interest in traditional Cherokee spiritual, medicinal, and cultural practices. Amberstone began to care for her family when she was 12 years old, after her mother contracted cancer.

Amberstone earned her B.A. in Cultural Anthropology and her M.A. in Health Education. However, because of her disability she initially struggled to find work, and worked for a time as a barmaid and go-go dancer. She moved to Canada after falling in love with a man from Manitoba, and to live among indigenous people who practiced their traditional way of life. She has been employed as health researcher and writer of educational materials for the Dene Nation in the Northwest Territories, a writer of cross-cultural awareness workshop material, a teacher and program coordinator of Native arts and crafts, a life skills coach and counsellor, and cook. She has avoided cities most of her life and has lived in “rain forests of the west coast, a tepee in the desert and a small village in Canada’s arctic.”1

After government cutbacks in the late 1980s, Amberstone turned to writing. Although without eyesight, her stories come to her in vivid dreams and visions. She was encouraged by her typing instructor to write, and used audio recordings of her dreams to learn typing skills, but it was not until her brother gave her a computer with text-to-speech technology that she was able to begin seriously. She writes primarily speculative fiction and is a member of SF Canada, through which she has co-edited and contributed to Communique, SF Canada’s newsletter.

Amberstone currently resides in Victoria, B.C. near her children and grandchildren.

File 1.13 is restricted for the life of Celu Amberstone.

The following bibliographic material has been catalogued in the University of Victoria Library:

The following bibliographic material has been catalogued in University of Victoria Library: