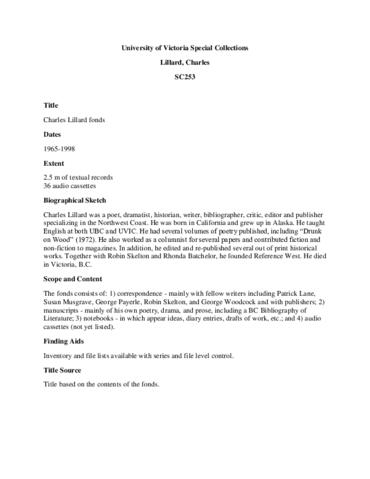 2.5 m of textual records and other material

Charles Lillard was a poet, dramatist, historian, writer, bibliographer, critic, editor and publisher specializing in the Northwest Coast. He was born in California and grew up in Alaska. He taught English at both UBC and UVIC. He had several volumes of poetry published, including “Drunk on Wood” (1972). He also worked as a columnist for several papers and contributed fiction and non-fiction to magazines. In addition, he edited and re-published several out of print historical works. Together with Robin Skelton and Rhonda Batchelor, he founded Reference West. He died in Victoria, B.C.