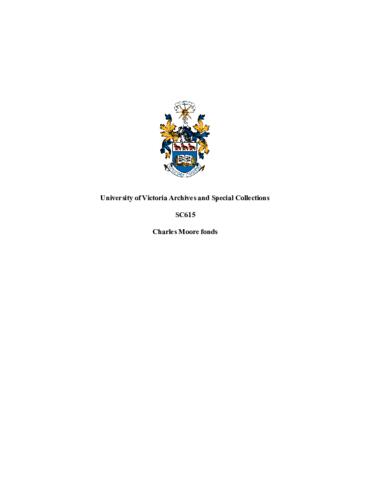 20 cm of textual records and other material

Born in Kingston-upon-Hull, Yorkshire in 1921, Charles Arthur Moore was a veteran and musician in the English Royal Marines and the Royal Canadian Navy. At the age of 14 he enlisted in the Royal Marine School of Music, where he received formal music education and served as band instrumentalist (cornet and french horn), instructor, teacher of musical theory, and Bandmaster aboard the HMS Excellent. After serving through World War II, he married Violet Amy (Burgess) Moore in August 1945 and their first child was born in 1951.

Moore ultimately terminated his engagement ranked B/Sergeant in 1953, whereupon he immigrated with his family to Victoria, B.C. and entered the Royal Canadian Navy. Their second child was born in 1956. Moore again served as instrumental instructor, teacher of music theory, and Training Chief in the Canadian Forces School of Music located in Esquimalt, B.C. He was promoted to Master Warrant Officer in 1961 and served as Chief Librarian from 1962 until his retirement from the Forces in 1971.

In his personal life, Moore was active in Christian organizations and taught swimming lessons to disabled children as a member of the parents group at Victor School in Victoria. He was a gold medalist in ballroom dancing and holder of the British Columbia Novice Championship in 1968 and 1970. His other hobbies included painting, drawing, fishing, and Hi-Fi enthusiasm. He passed away in 1994.

Series have been arranged by type.

Access to cassette is restricted due to lack of compatible equipment. Consult Special Collections for information about these materials.

No further accruals are expected.