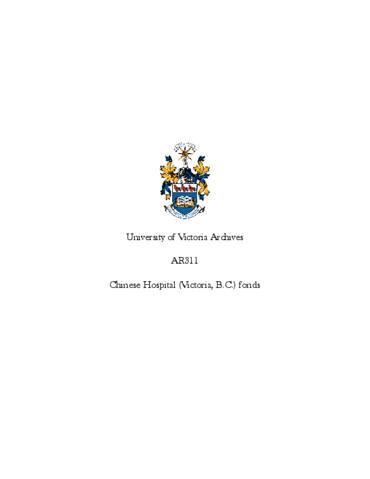 Shortly after the Chinese Consolidated Benefit Association was established in 1884, it organized a “Taipingfang” – meaning “peaceful room” – as an alternative to hospitals for Chinese immigrants unaccustomed to western medicine. The wooden hut served as a resting place for the sick. After conditions in the Taipingfang became insalubrious, the CCBA raised money to build a new, proper hospital. The new building, located at 555 Herald Street behind the CCBA building on Fisgard, was completed in 1899 and was funded through a travel tax placed on individuals going to China. The CCBA made an arrangement with shipping agents in China whereby the agents would not sell return tickets to Chinese who did not have a receipt proving they had paid the tax. In 1938 the CCBA announced it would close the hospital in order to prevent bankruptcy. As city council wanted the hospital to remain open, it lowered the CCBA’s rent and provided a subsidy for patients. At this point the hospital came under the jurisdiction of the City Medical Health Officer. The Chinese Hospital had never been a proper “hospital,” and in 1976, unable to meet the standards of the Hospital Act, the hospital applied for status as a Community Care Facility. Unable to meet the requirements for this either, the administration registered the Hospital as a boarding home, and remained open until the end of 1979.

Many Chinese Victorians were interested in the possibility of a Chinatown care facility after the closing of the hospital. In 1981 the Victoria Chinatown Care Facility formed, and on 25 February 1982 opened its new facility in the old location on Herald, leasing the land from the city for 99 years at $1 per year. The facility remains open today.

For a more in-depth history, see David Lai’s essay “From Self-segregation to Integration: The Vicissitudes of Victoria's Chinese Hospital” in BC Studies number 80 (winter 1988).