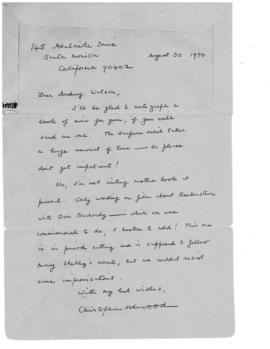 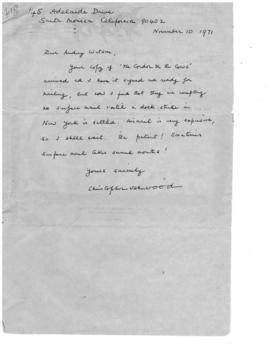 Novelist, born in Disley, Cheshire, NWC England, UK. He studied at Repton, Cambridge, and London, and taught English in Germany (1930-33). His best-known novels, Mr Norris Changes Trains (1935) and Goodbye to Berlin (1939), were based on his experiences in the decadence of post-slump, pre-Hitler Berlin, and later inspired Cabaret (musical, 1966; filmed, 1972). In collaboration with Auden, a school friend, he wrote three prose-verse plays with political overtones. He also travelled in China with Auden in 1938, and wrote Journey to a War (1939). In 1939 he emigrated to California to work as a scriptwriter, and became a US citizen in 1946. Later novels include Prater Violet (1945), The World in the Evening (1954), and Meeting by the River (1967).

The collection consists of 2 holograph signed aerograms to Audrey Watson in response to a request for an autograph; one letter alludes to the author's current activities.