University of Victoria (B.C.). Board of Governors 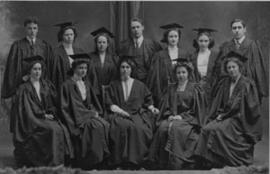 Fonds consists of records predominately related to various aspects of Doyle's professional life as a published poet and literary critic, as well as his teaching and committee work at the University of Victoria. Included are research materials, correspondences, and drafts for Doyle's biography of Richard Aldington, "Rachard Aldington: A Biography" (Macmillan, 1989); his biography of American poet William Carlos Williams, "William Carlos Williams and the American Poem" (Macmillan, 1982); his publication on James K. Baxter, "James K. Baxter" (Twayne Publishers, 1976); his "Earth Meditations" poetry; and manuscripts from the poetry journal "Tuatara" for which Doyle served as editor. University of Victoria related records include course notes,1981-88; and committee papers from the Committee on Alternatives for British Columbia (CABC),1983-1985 and the End the Arms Race Committee, 1983-86.