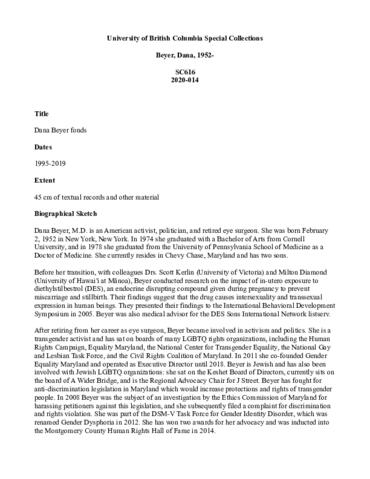 45 cm of textual records and other material

Dana Beyer, M.D. is an American activist, politician, and retired eye surgeon. She was born February 2, 1952 in New York, New York. In 1974 she graduated with a Bachelor of Arts from Cornell University, and in 1978 she graduated from the University of Pennsylvania School of Medicine as a Doctor of Medicine. She currently resides in Chevy Chase, Maryland and has two sons.

With colleagues Drs. Scott Kerlin (University of Victoria) and Milton Diamond (University of Hawai'i at Mānoa), Beyer conducted research on the impact of in-utero exposure to diethylstilbestrol (DES), an endocrine disrupting compound given during pregnancy to prevent miscarriage and stillbirth. Their findings suggested that the drug causes intersexuality and transgender expression in human beings. They presented their findings to the International Behavioral Development Symposium in 2005. Beyer was also medical advisor for the DES Sons International Network listserv.

After retiring from her career as eye surgeon, Beyer became involved in activism and politics. She is a transgender activist and has sat on boards of many LGBTQ rights organizations, including the Human Rights Campaign, Equality Maryland, the National Center for Transgender Equality, the National Gay and Lesbian Task Force, and the Civil Rights Coalition of Maryland. Beyer has fought for anti-discrimination legislation in Maryland which would increase protections and rights of transgender people. In 2008 Beyer was the subject of an investigation by the Ethics Commission of Maryland for harassing petitioners against this legislation, and she subsequently filed a complaint for discrimination and rights violation. She was part of the DSM-V Task Force for Gender Identity Disorder, which was renamed Gender Dysphoria in 2012. In 2011 she co-founded Gender Equality Maryland and operated as the executive director until 2018. She won the 2010 Community Advocacy award from the Capital Area Gay & Lesbian Chamber of Commerce, the 2011 Best Transgender Advocate award from the Washington Blade, and was inducted into the Montgomery County Human Rights Hall of Fame in 2014.

Beyer identifies as a Progressive Democrat and was the first transgender candidate for State Senate in American history. She ran three unsuccessful campaigns for public office: State Delegate in 2010, and State Senator in 2014 and 2018. She supported Hillary Clinton's candidacy in the 2016 U.S. presidential election.

Material was donated by Dana Beyer in 2019.

Original order has been preserved.

Donation included the children's book The Purim Superhero by Elisabeth Kushner (illustrated by Mike Byrne), produced by the Keshet organization; this title has been catalogued in the University of Victoria Libraries' Curriculum Collection, call number 823 K87P87.