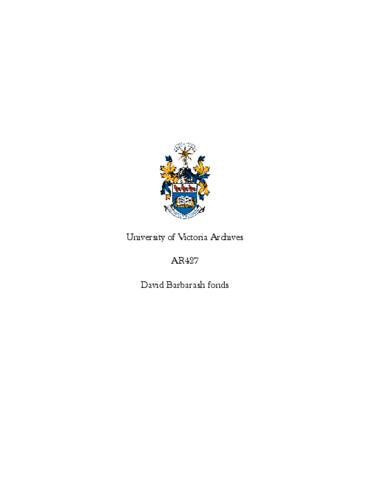 180 cm textual and other material

David Barbarash was the North American press officer for the Animal Liberation Front (ALF) from mid-1999 until late-2002. He also founded the North American Animal Liberation Front Supporters Group in Toronto in the early 1980s. Barbarash has been linked to Anti-Racist Action, Anti-Fascist Militia, Militant Direct Action Task Force, the Justice Department, Earth First!, the Animal Liberation Front and the Earth Liberation Front. He began <i>Ekomedia</i> (later retitled <i>Ecomedia</i>) in Toronto in 1984, an alternative/ anarchist wire service inspired by <i>BC Blackout</i>. Ecomedia published the <i>Anti-Authoritarian News</i>, later the <i>Ecomedia Bulletin</i>, which ran until 1992. (For more information on <i>Ecomedia</i>, see Kerry Mogg, "Introduction to Zines and Small Press," in <i>Only a Beginning: An Anarchist Anthology</i>, pg. 366)
<br>In Toronto in 1988, Barbarash was convicted of breaking the windows of fast food restaurants, fur stores and butcher shops. He was also convicted of property damage worth $50,000 and the theft of 29 cats from the University of Alberta in Edmonton in 1992. Fellow activist Darren Thurston served two years in prison for participating in the University of Alberta action, but Barbarash fled to the US to avoid arrest, and lived in hiding there for two years until the U.S. Federal Bureau of Investigation (FBI) found him living in California. In 1994, Barbarash was deported back to Canada and served four months in jail before being released for time served and a guilty plea.
<br>A Royal Canadian Mounted Police (RCMP) investigation of David Barbarash, which began in 1997, was prompted by a series of pipe bombs sent through the mail to various individuals and organizations across Canada in 1995.
<br>In 1998, Barbarash and Thurston were charged with sending letters with razor blades inside to hunters and guide outfitters across British Columbia. The charges were later dropped after the RCMP refused to provide documents to the defendants' lawyers. It is posited that the documents would have confirmed that the RCMP were using undercover police agents, a fact Barbarash maintained the RCMP lied about at the defendants' preliminary hearing. Barbarash always stated his innocence and alleged the undercover agents were attempting to entrap him to commit crimes in the course of their investigation.
<br>Barbarash's home in Courtenay, British Columbia was raided on July 30, 2002 in response to a request from the FBI, which regards the ALF as a domestic terrorist organization. Materials seized during this raid were returned to Barbarash without ever reaching US custody, owing to a judge who overturned the search warrant in response to what she termed "triple-hearsay" used in obtaining the warrant.
<br>Of his activities regarding animal rights, Barbarash states: "Just because they can’t speak up for themselves doesn’t mean that we have the right to do whatever we please to them." (Source, ALF David Barbarash interview http://www.animalliberationfront.com/ALFront/Interviews/Interview%20with%20David%20Barbarash.htm)

Received from David Barbarash in 2008.

Select items from the collection of David Barbarash have been digitized and are available through UVic Digital Collections.

Part of the Anarchist Archive.

Created on 20 February 2013 by the University Archivist.