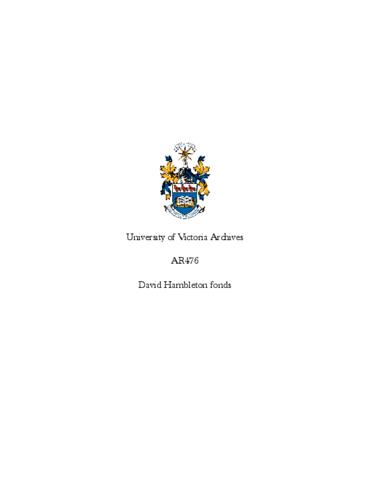 David Herbert Hambleton was born 18 December 1932 in England. When he was four months old his father, Fred, died. In 1939 Hambleton’s mother put David and his elder brother Brian in the Alexandra Orphanage, Maitland Park, Haverstock Hill. He left the school in 1948. Hambleton got his first job working at Wethered’s Brewery in Marlow in the architecture office. Following this he moved to Purley and worked as an assistant in the office of A.E. Richardson on Old Burlington Street. This position involved restoration of historic buildings damaged in the War, including St. James Church, Piccadilly; St. Alphege Church, Greenwich; Trinity House, Tower Hill. He also worked for Louis de Soissons for several years, and had his own practice for a short time. In 1958 Hambleton immigrated to Canada and got a job in Victoria with the firm Birley and Wagg. After 1966 the firm became known as Wagg and Hambleton. Hambleton retired in 2005. He is married to his second wife and has five daughters.