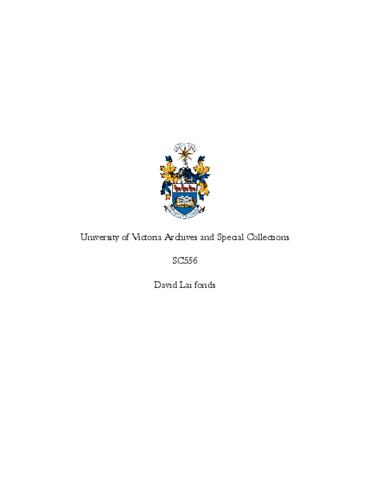 78 cm of textual records and other materials.

David Chuen-Yan Lai was born on 16 September 1937 in Guangzhou, the eldest of three boys. When he was two-years-old his family moved to Hong Kong. During World War II his father was killed. Lai earned his Bachelor of Arts (1962) and Master of Arts (1964) from the University of Hong Kong. Following this he received a British Commonwealth Scholarship which allowed him to earn a Doctorate in geography from the London School of Economics, University of London, which he completed in 1967. His thesis is entitled The Cotton Spinning and Weaving Industry of China, c. 1890-1957: A Study in Industrial Geography. Following this he returned to Hong Kong and taught at the University for a year.

Lai immigrated to Canada in June 1968 with his new wife. That summer he taught a course at the University of Alberta, and in August he moved to Victoria and began teaching in the geography department at the University of Victoria. In 1971 the geography department organized a seminar on urban development in Victoria. As Lai was the only Chinese in the department, he was assigned to research Victoria’s Chinatown. This project sparked Dr. Lai’s interest, and thereafter he began to study avidly Chinese-Canadian history and the history of Canadian Chinatowns.

By the late 1970s Victoria’s Chinatown had become a slum and the city was contemplating razing it. Dr. Lai acted as Chairman of the Chinatown Redevelopment Committee and in 1979 produced the report “The Future of Victoria’s Chinatown: A Survey of Views and Opinions.” The city elected to refurbish the area, a project that included restoring buildings, burying power lines, and building the first permanent Chinese arch in Canada. In 1995 Chinatown was designated a National Historic Site. A year later Lai helped to secure the same designation for the Chinese Cemetery at Harling Point. He was also heavily involved with the 1980 twinning of Victoria and Suzhou. Lai has published extensively on Chinese-Canadian history. Books include: Arches in British Columbia (1982), Chinatowns: Towns within Cities in Canada (1988), The Forbidden City within Victoria: Myth, Symbol and Streetscape of Canada's Earliest Chinatown (1991), Land of Genghis Khan: The Rise and Fall of Nation-States in China's Northern Frontiers (1995), Building and Rebuilding Harmony: The Gateway to Victoria's Chinatown (1997), Chinese Community Leadership: Case Study of Victoria in Canada (2010), and Great Fortune Dream: The Struggles and Triumphs of Chinese Settlers in Canada, 1858-1966 (2016). In 2003 he retired from teaching, and is currently a Professor Emeritus at the University of Victoria. In 1980 he was made an Honorary Citizen of Victoria, and in 1983 a Member of the Order of Canada.

In 1968 Lai married Roberta Manyuk. They have two children, Jim Yuan (born 1971), who teaches at the University of Toronto Faculty of Dentistry, and Joan Man (born 1972), a dentist who lives in Vancouver.

The fonds consists of documents relating to David Lai’s work in Victoria, including the restoration of Chinatown and the twinning of Victoria with Suzhou, as well as other heritage projects in the community. Also included are documents related to awards and appointments Lai received throughout his career.