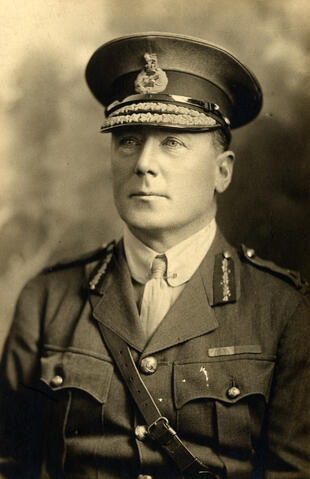 William Okell Holden Dodds was born on 3 July 1867 in Yarmouth, Nova Scotia. He was manager of the Montreal Agency of the Mutual Life Insurance Company of New York, and a keen supporter of sports in that city. Prior to the Great War BGen. Dodds had been a militia officer, a Major in the Artillery--3rd Montreal Battery--although his military career began in the 5th Royal Highlanders. He also served in the Canadian Grenadier Guards and the Royal Montreal Regiment. In 1914 he joined the Canadian Expeditionary Force and became Officer Commanding the 1st Battery, Canadian Field Artillery, at Valcartier Camp and shortly thereafter was promoted to Lieut. Colonel. For a time he was Adjutant of the 1st Brigade, C.F.A., commanded by L/Col. E. W. B. Morrison. He sailed with the First Contingent, C.E.F., for England in October 1914. He succeeded L/Col. Morrison as Commanding Officer of the 1st Bde., C.F.A., and served in France with the 1st Cdn. Division. L/Col. Dodds, later in 1915, commanded the 5th Bde., C.F.A., on Salisbury Plain and in France with the 2nd Cdn. Div. Returned to England in September 1916 to command the 8th Cdn. Training Bde. and almost immediately, in October 1916, was appointed C.R.A. (Commanding or Commander Royal Artillery) 4th Cdn. Div., with the rank of Brigadier General. On 29 March 1917 the 4th Cdn. Div. Artillery became the 5th Cdn. Div. Artillery following the re-organization of the artillery of the Canadian Corps. The 5th Cdn. Div. Arty. went to France in the late summer of 1917 and thereafter fought in all major offensives as Corps Troops. BGen. Dodds later served in Germany as part of the Occupation Forces, and for a short time, as Military Governor of the city of Bonn. In January 1919 he returned to the insurance business, in Montreal to continue his civilian career. Later he became Honorary Colonel of the Royal Montreal Regiment and, in 1929, Honorary Colonel Commandant, Canadian Artillery.