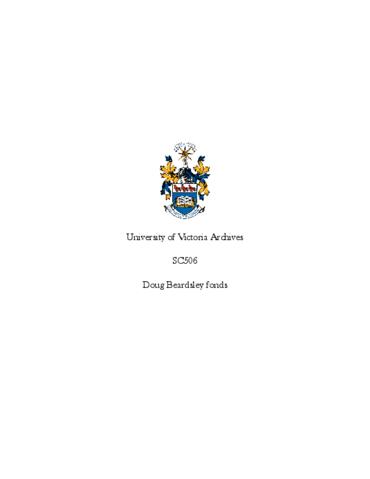 3.21 m of textual records and other materials.

J. Douglas (Doug) Beardsley was born in Montreal. He attended Sir George Williams (now Concordia) University and the University of Victoria, studying with Irving Layton and Robin Skelton respectively. He graduated from the University of Victoria and won the R.H. Petch Memorial Prize in Creative Writing. He received his M.A. in English from York University in 1978. His works of poetry include "Going Down Into History", "The Only Country in the World Called Canada", "Six Saanich Poems", "Play on the Water", "The Marie Poems", and "Nothing I Can Do to Stop the Sun From Sinking". In 1979, he collaborated with Theresa Kishkan on "Premonitions and Gifts" and with Charles Lillard on "Inside Passage".