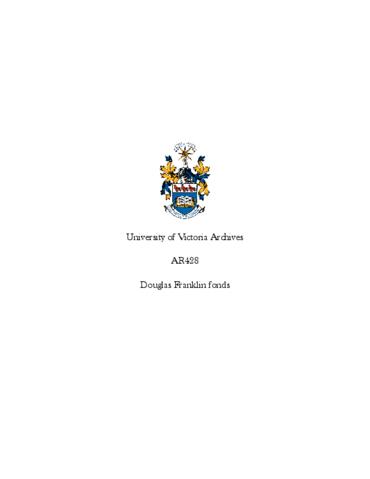 30 cm graphic and other material

Douglas Franklin was born in Port Alberni and educated at Vancouver Community College and the University of Victoria (Master of Arts). He received training in historic building conservation through the Architecture and Engineering Branch of the Parks Canada Agency, and completed professional development studies at the Banff School of Management.

Franklin worked in the preservation of historic architecture for more than thirty-five years. He was a consultant in building conservation in the 1970s, and was the first academic administrator of the Cultural Resource Management Program at the University of Victoria from 1979 until 1983. He was a founding trustee of the CFB Esquimalt Naval and Military Museum, and Chairman of the Saanich Heritage Advisory Committee. He served in several positions with the Heritage Canada Foundation in Ottawa from 1983 until 2007, including nine years as a senior executive. His areas of responsibility included variously: corporate relations, public and media relations, government relations, policy and programs. During his final years with the Foundation he served as acting Executive Director.

Franklin was responsible for key initiatives of the Heritage Canada Foundation. He led the successful campaign for the Heritage Railway Stations Protection Act passed in 1988, and was instrumental in securing funding from the public and private sectors for numerous projects. In 1989, he was seconded to the federal government to undertake a study of historic trusts in Commonwealth countries and the United States. Franklin was appointed by the Minister of Agriculture to the advisory council, Central Experimental Farm National Historic Site, Ottawa, from 1999 until 2003. He also served on the advisory committee of the Algonquin College heritage building restoration program in Perth, Ontario, from 2000 until 2006. Franklin retired from the Heritage Canada Foundation in 2007. He now acts as a location scout and adviser to the motion picture industry.

Franklin is a trustee of the Maritime Museum of British Columbia, a member of the Union Club, Victoria, and a life member of the Heritage Canada Foundation. He is an active Freemason and Shriner.

Donated to UVic Archives by Douglas Franklin in 2008.

For use in research and private study. Any other reproduction requires permission of the copyright holder.