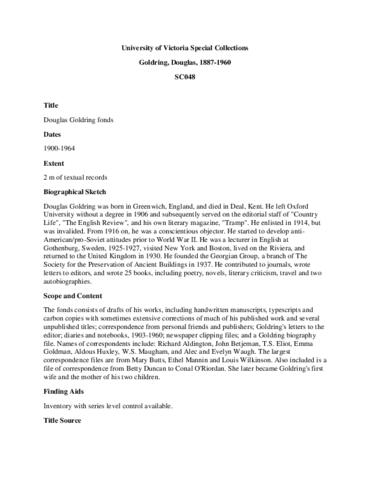 Douglas Goldring was born in Greenwich, England, and died in Deal, Kent. He left Oxford University without a degree in 1906 and subsequently served on the editorial staff of "Country Life", "The English Review", and his own literary magazine, "Tramp". He enlisted in 1914, but was invalided. From 1916 on, he was a conscientious objector. He started to develop anti-American/pro-Soviet attitudes prior to World War II. He was a lecturer in English at Gothenburg, Sweden, 1925-1927, visited New York and Boston, lived on the Riviera, and returned to the United Kingdom in 1930. He founded the Georgian Group, a branch of The Society for the Preservation of Ancient Buildings in 1937. He contributed to journals, wrote letters to editors, and wrote 25 books, including poetry, novels, literary criticism, travel and two autobiographies.