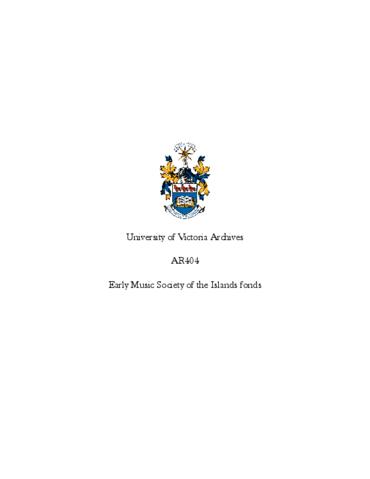 1.4 m of textual and graphic materials

The Early Music Society of the Islands (EMSI) was established in 1985 in Victoria, B.C. The mandate of the Society is to promote interest and participation in early music, sponsor performances and workshops, and acquire musical instruments, music and equipment as well as other assets to fulfill these objectives. The founding members of EMSI were Susan Grant-Allen, Joan and Richard Backus, Ron Bell, Paul and Peggy Palmer, and James Young. Presidents of the Society have been Richard Backus (1986-1988), Pat Weldon (1989-1993), and James Young (1994-present).

Member, individual donor, and scholarship information in the fonds will only be disclosed in accordance with Section 22 of the BC Personal Information Protection Act.

The Society retains copyright control over the fonds.