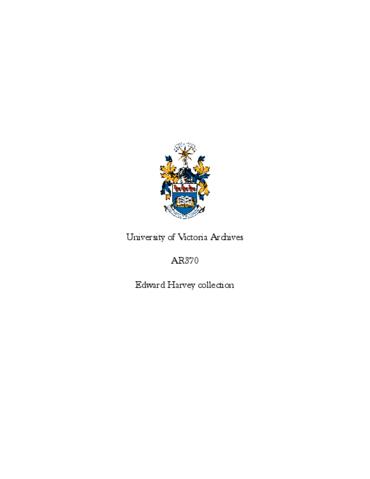 Edward Burns Harvey was born in 1939 to Richard Burns Harvey and Helen Neild. He entered Victoria College in 1959 and completed two years of school there. After travelling in Europe in 1961 and 1962, Harvey returned to Canada in September of 1962, enrolled at the University of British Columbia and in 1963 received his Bachelor of Arts. The following year he earned a Master of Arts, studying under Kaspar Naegele. In 1965 Harvey began his doctoral studies at Princeton University. In the fall of 1966 Harvey took an assistant professorship at the University of Western Ontario in the sociology department, and in the spring of 1967 he completed his Doctorate. That fall Harvey accepted a position at the University of Toronto, where he remained for the duration of his career.

Collection consists of various items that Harvey collected throughout his life. Items specifically reflect life in Victoria in the 1950s and 1960s.