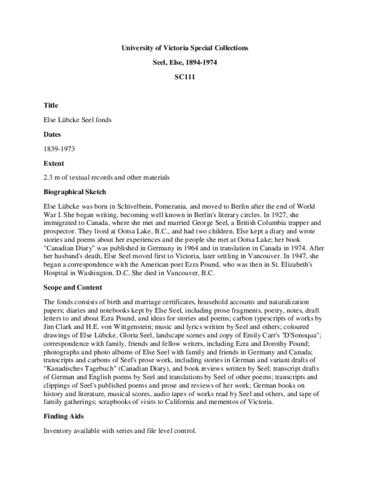 2.3 m of textual records and other material

Else Lübcke Seel was born in 1894 in Schivelbein, Pomerania. After the end of World War I, she moved with her mother and aunt to Berlin, where she worked in the archives of a bank. She began writing and became well-known in Berlin's literary circles. In 1927, after an unhappy love affair with the Danish writer Martin Andersen-Nexö, she decided to emigrate to Canada. Upon her arrival in Vancouver she met George Seel, a prospector and trapper who lived in central British Columbia. They were married soon after her arrival and settled in George's one-room cabin near Ootsa Lake, some 600 miles north of Vancouver. They lived there for 25 years; Else was frequently left on her own for several months at a time to raise their two children while George was away trapping and prospecting for gold. She kept a diary and wrote short stories and poems about her experiences among the settlers around Ootsa Lake.

The Seels were beset by hardships during their years at Ootsa Lake; George's income was frequently very small, especially during the Depression of the 1930's, and as German immigrants, they were often harassed by their neighbours during World War II. In 1948-1949 the properties around the lake were faced with flooding due to the proposed Alcan dam, so the Seels began planning to move elsewhere. In 1949, however, George Seel died suddenly of pneumonia; Else and the children moved to Victoria and later settled in Vancouver. She continued to write stories and novels; her book, Kanadisches Tagebuch was published in Germany in 1964. It was translated into English by UVic. Professor Rodney Symington as Canadian Diary in 1974. (It remains unpublished in April of 2002.) Her work impressed Prof. Symington, who described her as "one of those rare pioneers who could write".

In December 1946, Seel read a newspaper report of Ezra Pound's confinement in St. Elizabeth's Hospital; troubled by the paper's account of Pound's incarceration, she sent him a few words of encouragement, thus beginning a ten-year exchange of letters with Pound and his wife Dorothy. Seel kept the letters she received from the Pounds (over 100 in all) and also kept copies of letters she sent to them. Prof. Symington has commented on the remarkable characteristics of their correspondence; as he says, "It is a remarkable fact that Else Seel from her lonely log-cabin in the forests of British Columbia played for five years the role of cultural mediator between German culture and Ezra Pound. In fact, it is true to say that between 1947 and 1953 she was one of Ezra Pound's chief consultants on German culture and history." Pound and Seel never met, but their exchange of letters proved extremely important to both of them.

Else Seel died in Vancouver in February 1974.