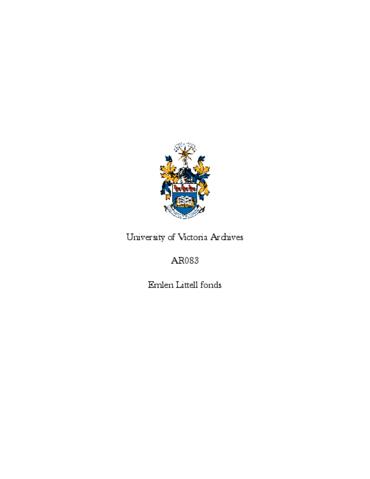 Emlen Trenchard Littell was born in Maryland in 1917 to Emlen Trenchard Littell (1874-1937) and Helen Akin Littell (1877-1964). In 1940 he graduated from Yale University and subsequently served in the Pacific in World War II. He was editor at Stanford Press in Palo Alto, California, and at the University of California Press in Berkeley. He later earned an MA in biology at Simon Fraser University. Littell was an ardent environmentalist, and one of the founders of the Sierra Club of Western Canada. He served as financial director of the Sierra Club Foundation and was the technical editor of Forest Planning Canada. He was also active in Veterans against Nuclear Arms and The World Federalists. Littell died in Victoria in 1994.