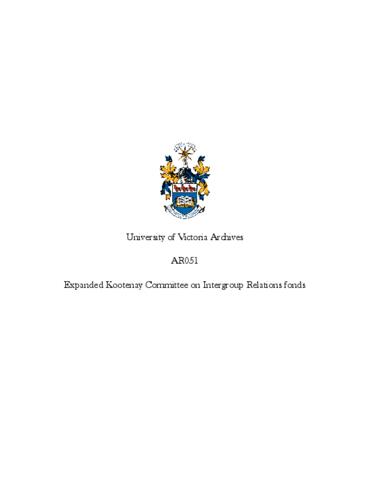 The Kootenay Committee on Intergroup Relations (KCIR) was established in 1979 at the request of the Attorney-General to provide a process of consultation towards the resolution of problems with Doukhobors in the Kootenays. In 1980, the Committee established the Expanded Kootenay Committee on Intergroup Relations to include participation of various Doukhobor groups in order "to reduce the degree of participation and involvement in acts of arson and other depredations by helping to resolve conflicts between Doukhobor groups and Doukhobor groups and government." The Expanded Committee was made up of representatives from the Canadian Doukhobor Society, United Spiritual Communities of Christ (USCC), Sons of Freedom (Gilpin and Crescent Valley), a representative from the Ministry of Attorney-General, and Mel Strangland from the KCIR (Chair). The Committee held public hearings, and collected historical reports about Doukhobor conflicts.