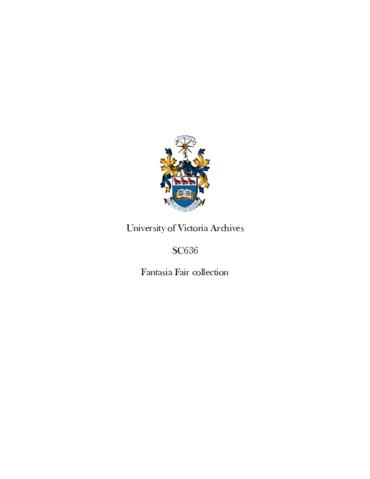 Beginning in 1975, Fantasia Fair is a week-long trans* conference held every October in Provincetown, Massachusetts. It provides a safe space for cross-dressers, transgender and gender questioning people to experiment with their gender identities and presentations, to interact with their communities, and to advocate for their rights. It is attended by a diverse audience of trans men and women, cross-dressers, and genderqueer people of every sexual orientation.

The conference began as an initiative of the nonprofit Outreach Institute for Gender Studies, and was founded by Ari Kane, Betty-Ann Lind, Betsy Shaw, Linda Franklin, and other members of the Cherrystone Club, a transgender support group in Boston. The founders began working with heterosexual cross-dressers to debut the event, but was it was envisioned as a place where transgender people could learn about themselves and feel less isolated by a discriminatory society. It was promoted through flyers, brochures to past participants, ads and articles in publications, by staff members in speaking engagements, and by word of mouth.

The second annual Fantasia Fair, in 1976, offered events such as fashion and beauty courses, a fashion show, awards banquet, film festival, feminization and a course for the wives and girlfriends of trans* participants in order to foster healthy relationships and understanding between partners. Following years included workshops on “femme comportment”, femininity awards (since retired), potluck dinners, community building, and pronoun usage and gender change. In recent years, seminars, workshops and talks have addressed political struggles such as hate crimes by the federal government, gendered washrooms, self-defense, and medical aspects of transitioning.

In 2000, nonprofit Real Life Experiences was founded to serve as the parent nonprofit of Fantasia Fair, whose stewardship was transferred in 2001.