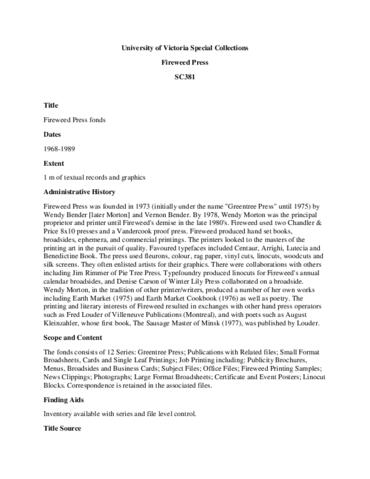 1 m of textual records and graphics and other material

Fireweed Press was founded in 1973 (initially under the name "Greentree Press" until 1975) by Wendy Bender [later Morton] and Vernon Bender. By 1978 Wendy Morton was the principal proprietor and printer until Fireweed's demise in the late 1980s. Fireweed used 2 Chandler & Price 8x10 presses and a Vandercook proof press. Fireweed produced hand set books, broadsides, ephemera, and commercial printings. The printers looked to the masters of the printing art in the pursuit of quality. Favoured typefaces included Centaur, Arrighi, Lutecia and Benedictine Book. The press used fleurons, colour, rag paper, vinyl cuts, lino cuts, woodcuts and silk screens. They often enlisted artists for their graphics. There were collaborations with others including Jim Rimmer of Pie Tree Press. Typefoundry produced lino cuts for Fireweed's annual calendar broadsides, and Denise Carson of Winter Lily Press colaborated on a broadside. Wendy Morton, in the tradition of other printer/writers, produced a number of her own works including Earth Market (1975) and Earth Market Cookbook (1976) as well as poetry. The printing and literary interests of Fireweed resulted in exchanges with other hand press operaters such as Fred Louder of Villeneuve Publications (Montreal), and with poets such as August Kleinzahler, whose first book, The Sausage Master of Minsk (1977), was published by Louder.