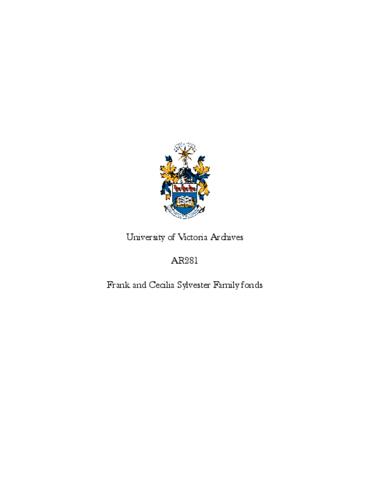 Frank Sylvester and Cecelia Davies Sylvester, and their families, were notable figures in the early Victoria establishment. They were among the first Jews to arrive in Victoria and were active in the founding of the Jewish congregation.

Francis Joseph Sylvester (1837-1908) was born in New York and moved to San Francisco when he was 20. He traveled to Victoria in 1858 en route to the Fraser River gold fields and returned to Victoria in 1863. After first working for clothier, H. M. Cohen, Sylvester joined the auctioneer firm of Judah Philip Davies and, in 1869, married Davies’s youngest daughter, Cecilia. Sylvester remained with the auction house for 15 years and then established his own accounting business. He was active in public affairs and helped establish the Victoria Fire Department Charitable Association. He was prominent in the Ancient Order of United Workmen and was the secretary of the Natural History Society. Sylvester also gave lectures at the Victoria Historical Society.

Cecilia Davies Sylvester (1848-1935) was born in Sydney, Australia and moved with her parents to San Francisco and finally to Victoria in 1863. She was a member of the Imperial Order Daughters of the Empire and was active in charitable work and Jewish organizations. She was on the board of the Royal Jubilee Hospital, which her father helped found.

Lawrence and Ruby Macrae collected and maintained their family archives.