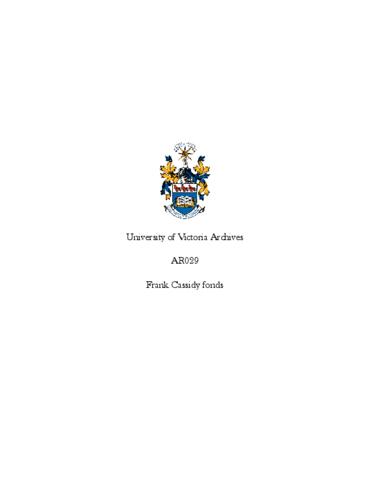 Frank Cassidy (1946-2007) was a professor in the School of Public Administration at the University of Victoria, and specialized in the history of native self-government. Among his works are Proud Past: A History of the Wet'suwet'en of Moricetown, B.C. (1980), On the Inherent Jurisdiction of Indian Governments (1987), After Native Claims? The Implications of Comprehensive Claims Settlements for Natural Resources in British Columbia (1988), Indian Government: Its Meaning in Practice (1989), and The Spirit of Sparrow: Aboriginal Rights and the Constitution (1990). In 1969 Cassidy married Maureen Kulbaitis (1944-1996), with whom he was a member of the April Third Movement while at Stanford University. The couple had two children, Amy and Megan. Following Maureen’s death he married a second time, to Carol ___. Cassidy died on 30 September 2007, after having suffered a stroke in 2004.