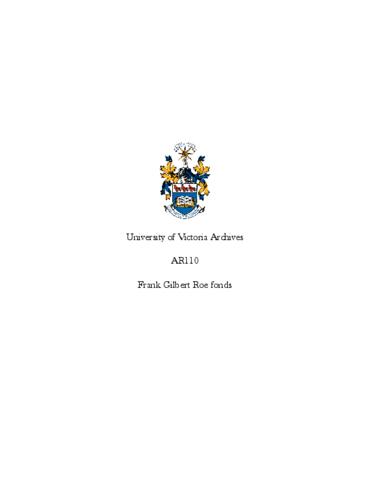 Frank Gilbert Roe was born in Sheffield, England on 2 August 1878. His schooling came to an abrupt end in 1889 when his father, a tea blender by trade, lost his job, forcing frank to work to help support the family. In 1894, as conditions had not improved, the family decided to immigrate to Canada. They landed in Quebec City on 17 June 1894 and arrived in Red Deer, Albert 5 July 1894.

The Roes then took up a homestead ten miles east of Blackfalds, Alberta 30-39-25 west of the 4th Meridian. That winter Roe’s father became lost in a storm and wandered for hours. This experience so weakened him that he died within the month. The rest of the family decided to carry on and they continued to farm until 1907. During this time Roe continued his education by borrowing from the library of one of his neighbours, Paul Makepiece. Another source of good literature was the books that were sent by the London editor of The Manchester Guardian to his brothers, who were close neighbours of the Roes. This constant reading of the great nineteenth-century historians – Gibbon, Carlyle, Macaulay et al – helped in the formation of the semi-classical style of writing that characterizes Roe’s works.

Meanwhile, the homesteading did not go well. The wheat crop was hailed-out in 1906 and in 1907 there was a very late seeding followed by an early snowfall which flattened the crops. This double disaster convinced Roe to give up the homestead. He was 30 years old by this time and decided to look for other work while he was still young enough to change his occupation. The railroads were at this time moving west and were desperate for men, so Roe became a “railroader.”

He started out at the bottom on the “coal gang” in 1909, and over the years worked his way up to be a locomotive engineer. He worked as far east as Rivers, Manitoba, and as far west as Tête Jaune Cache, British Columbia. From his vantage point high in the cab of his locomotive, he could see signs of trails over the prairies, particularly after a light snowfall or when the wind had blown a light covering of snow into all the hollows. (See photographs, series D, folders 1-3.) His ever-increasing interest in these paths and trails combined with his antiquarian interests started him on his research on the North American buffalo. (See F. G. Roe, The North American Buffalo: A Critical Study of the Species in Its Wild State, University of Toronto Press, 1951, preface, p. v.) Roe had joined the English Place-Name Society in 1924 and had started to write on the buffalo and buffalo trails by 1926. His first published article, “The ‘Wild Animal Path’ Origin of Ancient Road,” appeared in Antiquity in 1929. Roe’s research on the North American buffalo had become almost a total commitment by this time and by 1934 his published articles on the buffalo had begun to appear.

As Roe’s interests expanded so did his circle of friends. He met Ernest Thompson Seton through his friendship with Professor William Rowan and D. E. Cameron, Librarian of the University of Alberta. Roe also met W. T. Hornaday, Chief Zoologist of the Smithsonian Institute, whose theory on the part aboriginals played in the virtual extermination of the buffalo in the mid-1900s Roe set out to demolish. What particularly incensed him was Hornaday’s almost total condemnation of aboriginals vis-à-vis the buffalo and the refutation of these ideas became somewhat of a crusade for Roe.

When Roe’s monumental work on the North American buffalo was completed, D. E. Cameron started his efforts to gain publication for the book; it was sent to various university presses and other institutions with no success. It was not until a grant was received from the Canada Council to aid in the typing and publication costs that it was finally accepted for publication by the University of Toronto Press. A grant for typing was necessary at this time for the work was in manuscript form. (Roe did not learn to type until 1952.) The first edition came out in 1951 with a second edition appearing in 1970. Roe’s second book, The Indian and the Horse, was published by the University of Oklahoma Press in 1955, with the book going into its fourth printing in 1974.

In recognition of Roe’s wide-ranging interests and scientific writings he was awarded with an LL.D. in 1951 by the University of Alberta. He was later nominated for membership in the Royal Society of Canada by Dr. F. E. L. Priestly of the University of Toronto and Dr. George F. G. Stanley. After some little debate Dr. Roe was duly elected a Fellow of the Royal Society in 1960. Roe retired from the Canadian National Railway in 1944 and moved to Victoria, British Columbia. He was reworking his manuscripts and attempting publication of some of them almost to the time of his death. Roe died in Victoria on 11 April 1973.

Manuscripts acquired in 1974 by the University of Victoria by purchase from Mr. and Mrs. Tolson, heirs of Roe. Check with archivist regarding publication rights.