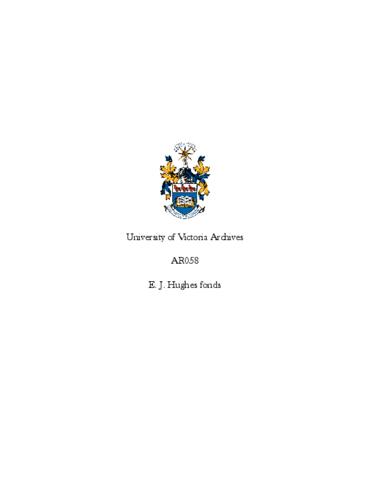 Edward John (E. J.) Hughes was a Canadian painter best known for his paintings of British Columbia landscapes. Hughes was born 17 February 1913 in North Vancouver, and grew up in Nanaimo. After high school he attended the Vancouver School of Decorative and Applied Arts (now Emily Carr University) where he studied with Frederick Varley, graduating in 1933. When war broke out in 1939 Hughes enlisted with the Royal Canadian Artillery. While posted in England he was made an official war artist, and from 1943 to 1946 depicted war scenes in England and Alaska.

Following the War Hughes and his wife, Fern Rosabell Irvine (1916-1974), moved to Victoria. Due to financial struggles, the couple moved shortly thereafter to a cabin at Shawnigan Lake. Max Stern (1904-1984), Emily Carr’s former dealer and the owner of the Dominion Gallery in Montreal, discovered Hughes’s work and made a deal to buy all of his paintings. Their relationship lasted until Stern’s death, and Dominion continued to buy Hughes’s paintings until his death. Ed and Fern had three children – Edward, Elizabeth and Mac – all of whom died in infancy. Hughes died 5 January 2007 at age 93.

Accession 2004-005 photocopied from originals at National Gallery of Canada.