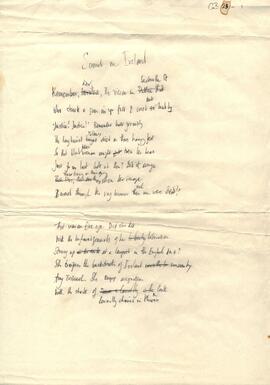 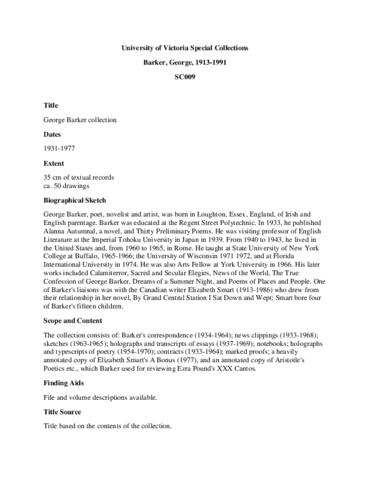 George Barker, poet, novelist and artist, was born in Loughton, Essex, England, of Irish and English parentage. Barker was educated at the Regent Street Polytechnic. In 1933, he published Alanna Autumnal, a novel, and Thirty Preliminary Poems. He was visiting professor of English Literature at the Imperial Tohoku University in Japan in 1939. From 1940 to 1943, he lived in the United States, and from 1960 to 1965, in Rome. He taught at State University of New York College at Buffalo, 1965-1966; the University of Wisconsin 1971 1972, and at Florida International University in 1974. He was also Arts Fellow at York University in 1966. His later works included Calamiterror, Sacred and Secular Elegies, News of the World, The True Confession of George Barker, Dreams of a Summer Night, and Poems of Places and People. One of Barker's liaisons was with the Canadian writer Elizabeth Smart (1913-1986) who drew from their relationship in her novel, By Grand Central Station I Sat Down and Wept. Smart bore 4 of Barker's 15 children.