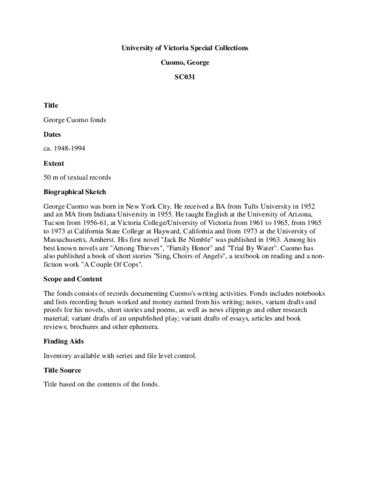 George Cuomo, novelist, short story writer, critic and poet, was born in the Bronx, New York, on 10 October 1929. The son of machinist John Joseph Cuomo and Lillian Vogt, he attended Stuyvesant High School in New York before joining the army in 1948 for a one year stint. From the army he proceeded to an academic career, graduating with a B.A. magna cum laude in English from Tufts University (1952), and an M.A. in Creative Writing from the University of Indiana (1955). During this period he worked as editor of the college newspaper, as college correspondent for the Boston Post and as a novelist, completing two novels while still a student. As a student he supported himself by working in a butcher shop, a factory, for a clothing manufacturer, and as an advertising and public relations man. In August 1954 he married Sylvia Epstein. They live in Castro Valley, California and have five children. From 1956 to 1961 Cuomo was an instructor of English at the University of Arizona, Tucson, working during the summers as a copy editor for the Arizona Daily Star. He taught at Victoria College (later the University of Victoria) as Associate Professor of English from 1961 to 1965. Since 1965 he has been Professor and Head of the English Department of California State College at Hayward, California. Cuomo's fiction, criticism and poetry have appeared in such periodicals as The Saturday Review, The Nation, Literary Review, Colorado Quarterly and San Francisco Review. No doubt his literary agent, Monica McCall, to whom many of his manuscripts are addressed, helped to place much of his work. He has published five novels, a book of short stories and a text book on reading. Two collections of poetry remain unpublished.

The manuscripts of George Cuomo were acquired by the University Archives in 1966, 1969, 1973 and 1976, and include rough drafts and related material for his works Jack Be Nimble, Bright Day, Dark Runner, Among Thieves, Sing, Choirs of Angels, The Hero's Great Great Great Great Great Grandson, Pieces from a Small Bomb, "Soundings" and "Geronimo and the Girl Next Door".

The latest accruals are being processed and are not open to researchers.

Researchers may also wish to consult Cuomo's correspondence located in other records, including the papers of Robin Skelton and Roger Bishop, Cuomo's colleagues in the Victoria College/University of Victoria Dept. of English. The records of Roger Bishop also include drafts of 15 of Cuomo's poems, which Cuomo apparently gave to Bishop for his perusal.

In the late 1970's and early 1980's, Chris Petter began sorting and identifying the various manuscripts and also produced a preliminary finding aid. In the fall of 1990, Anne Maclean picked up where Chris left off, completing the re-foldering and re-boxing and producing an inventory. The biographical sketch of George Cuomo in the inventory is taken directly from an earlier finding aid, with some updates. Cuomo's papers provide an excellent record of his working habits and will be of particular interest to those students of creative writing as well as those interested in Cuomo himself. Cuomo was a tireless reviser, as his many variant drafts reveal, and he was also a thorough researcher. Among his research notes are clippings and correspondence relating to prison life, which he used as background for the prison scenes in Among Thieves (Accession 69-1, Box 1). Also included are many drafts of published essays, articles and book reviews, as well as some unpublished plays.