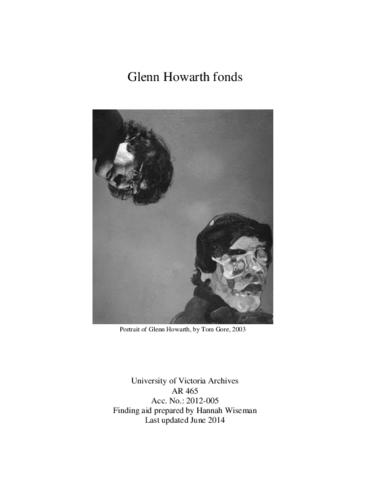 Artist, writer and teacher Glenn Edward Howarth was born in Vegreville, Alberta on September 1, 1946. Howarth moved to Victoria to study art at the University of Victoria. In 1982 he had one daughter, Rhiannon Williams, with his first wife Elizabeth Williams. His long-time partner Deborah Russell had two children. Glenn Howarth died in Victoria, B.C. on July 26, 2009.

In 1970, Howarth graduated with a Bachelor of Fine Arts from UVic. After graduation Howarth worked as an art critic, writing regular articles for both the Victoria Daily Times (1970-1973)and the Montreal Star (1970-1971).

For many years, Howarth was an art educator. He taught drawing, painting, computer arts and art history at several Canadian universities and colleges, including Acadia University, University of Victoria, Banff School of Fine Arts, University of Saskatchewan, and Victoria College of Art. Howarth also guest lectured at many schools including Ontario College of Art and Design, York University and Alberta College. From his personal studios in Fan Tan Alley, Brentwood Bay and Curtis Point, Howarth also taught drawing and painting to numerous students, and in 1987 founded the Victoria Drawing Academy.

The fonds reflects Glenn Howarth’s interests and ideas on art and life, as well as his relationships with friends, family, students, patrons and galleries.

The fonds has been arranged into six series: Personal papers, Art practice, Writings, Correspondence, Teaching, and Electronic and audio-visual materials.

Donated to the archives by Elizabeth and Rhiannon Williams in 2012.