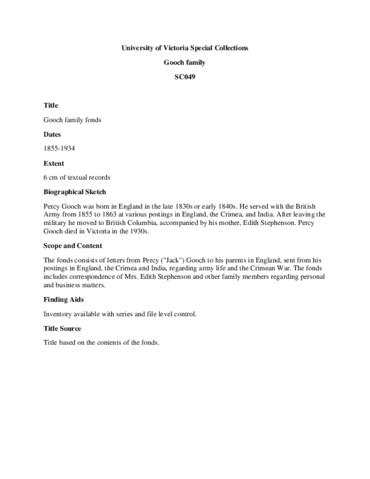 Percy Gooch was born in England in the late 1830s or early 1840s. He served with the British Army from 1855 to 1863 at various postings in England, the Crimea, and India. After leaving the military he moved to British Columbia, accompanied by his mother, Edith Stephenson. Percy Gooch died in Victoria in the 1930s.

The records of the Percy Gooch family were acquired by the University Archives in November 1988 from Mrs. Longstaff, a resident of Victoria, via Reginald Roy, Professor, U. Vic. Dept. of History. Mrs. Longstaff obtained the records from the estate of her sister, who was married to Francis W. Gooch, son of Percy Gooch. The material contains approximately 90 letters written by Percy ("Jack") Gooch between 1855 and 1863, while he was in the British Army at various postings in England, the Crimea and India. His letters describe army life in the Crimea during the war and the life of a British soldier stationed in India, and also discuss family matters. Researchers should note that Percy Gooch signed almost all his letters "Jack"; presumably this was either his middle name or a family nickname. In some of the letters sent to his mother from other people, he is referred to mostly as Percy and once as Jack.

In addition, there are also approximately a dozen letters and documents relating to personal and business matters of Mrs. Stephenson, Percy Gooch's mother, and other family members, dating between 1897 and 1934.

These records will be of particular interest to military historians studying the Crimean War, and complement similar records of the war housed elsewhere.

The fonds consists of letters from Percy ("Jack") Gooch to his parents in England, sent from his postings in England, the Crimea and India, regarding army life and the Crimean War. The fonds includes correspondence of Mrs. Edith Stephenson and other family members regarding personal and business matters.