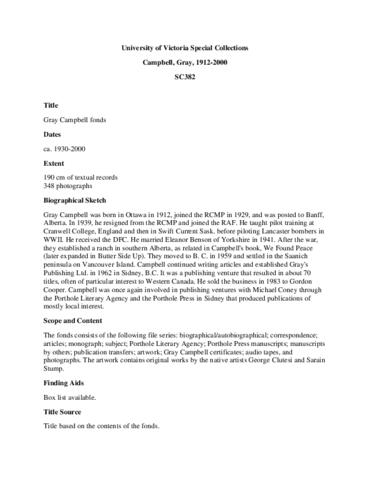 Gray Campbell was born in Ottawa in 1912 and joined the RCMP in 1929 and was posted to Banff, Alberta. In 1939 he resigned from the RCMP and joined the RAF. He taught pilot training at Cranwell College, England and then in Swift Current Sask. before piloting Lancaster bombers in WWII. He received the DFC. He married Eleanor Benson of Yorkshire in 1941. After the war they established a ranch in southern Alberta, as related in Campbell's book, We Found Peace (later expanded in Butter Side Up). They moved to B. C. in 1959 and settled in the Saanich peninsula on Vancouver Island. Campbell continued writing articles and established Gray's Publishing Ltd. in 1962 in Sidney, B.C. It was a publishing venture which resulted in about 70 titles, often of particular interest to Western Canada. He sold the business in 1983 to Gordon Cooper. Campbell was once again involved in publishing ventures with Michael Coney through the Porthole Literary Agency and the Porthole Press in Sidney which produced publications of mostly local interest.