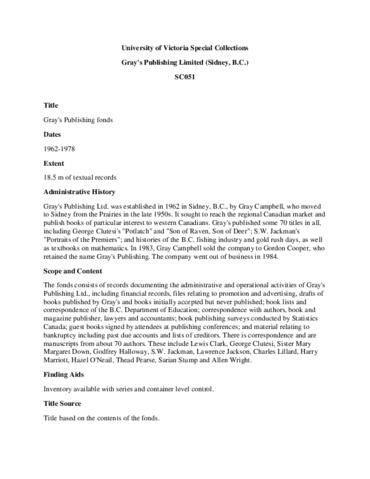 Gray's Publishing Ltd., located in Sidney, B.C., was established in 1962 by Gray Campbell. It sought to reach the regional Canadian market and publish books of particular interest to western Canadians. Gray Campbell, who moved to Sidney in the late 1950's, served on the Prairies with the Royal Canadian Mounted Police and overseas with the Royal Air Force. After the war he set up a small ranch near Cowley, Alberta. In 1953 his book, We Found Peace, about his family's life in the foothills, was published in Toronto. After moving to Sidney Campbell became interested in publishing when a neighbour, John Windsor, tried unsuccessfully to publish his manuscript about his wartime experiences. Two eastern Canadian publishers had turned it down, but Campbell and another friend, Sainty Rivers, another Albertan who was now running the weekly Sidney newspaper, decided to publish Windsor's book in 1962 under the title Blind Date. It sold well and was later dramatized by the CBC Radio. Windsor later had other books of his published by Gray's, including The Girl from Tibet (written with Tseten Dolkar), The Mouth of the Wolf and Nowhere Else to Go.

Gray's Publishing quickly became well-known as a market for local writers, and Campbell and his staff soon received more manuscripts than they could publish (generally they published only four titles a year). They preferred to publish Canadian manuscripts, particularly those dealing with the West Coast, but also received submissions from the
United States. Lacking money for advertising, Gray's depended on word-of-mouth to publicize their titles, and Campbell's son Tim served as salesman, travelling across Canada in a camper in order to cut down on expenses; Tim Campbell generally made two trips each year to many small towns and cities between Victoria and Central Canada. Another son, Dane Campbell, also worked on the staff, often accompanying Tim on his trips. Gray Campbell relied on knowledgable neighbours in Sidney to read manuscripts he received; among his neighbours he could count on finding "retired authorities in just about any field, even to heraldry".

Gray's published some 70 titles in all, including George Clutesi's works Potlatch and Son of Raven, Son of Deer, S.W. Jackman's Portraits of the Premiers, and histories of the British Columbia fishing industry and gold rush days, as well as textbooks on mathematics. In 1971 Gray's was awarded a Canada Council grant for $3,000, which they used to publish Indian Rock Carvings of the Pacific Northwest by Edward Meade that same year. This was one of the few occasions when Gray's received any government subsidies.

Gray's Publishing became increasingly beset with mounting production costs and also ran into copyright problems, with many of its authors demanding that the copyrights of their works be returned to them. In the end, R.M. Patterson (author of Dangerous River and Far Pastures) and other authors received their copyrights back. (Dangerous River is now being re-published in the United States, and White Cap Books of Vancouver now owns the copyright to Curve of Time, Gulf Island Explorer and Pacific Gardener). The company's financial and legal problems continued into the early 1980's, and in 1983 Gray Campbell sold the company to Gordon Cooper, who retained the name Gray's Publishing. However, the company soon went bankrupt and in 1984 it went out of business altogether. Today Gordon Cooper runs a book store in Victoria, while Gray Campbell, now retired, is still living in Sidney.

The records of Gray's Publishing Ltd. were acquired by the University of Victoria Special Collections in 1984.

Bankruptcy records are restricted for 30 years from the latest date in the file.

The records are considered to be a "closed fonds" and it is unlikely that any further accruals will be received.