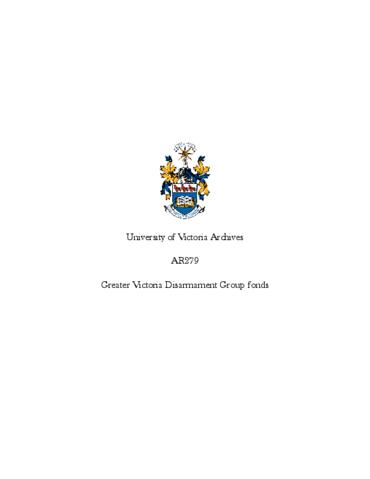 90 cm of textual records and other material

The Greater Victoria Disarmament Group (GVDG) was incorporated in 1983. In 1994, the name was changed to Victoria Peace Centre Society; it ceased activities in 1997. The GVDG was dedicated to verifiable nuclear disarmament, and created "programs of education and community awareness." The GVDG's predecessor was the Vancouver Island Coalition for Disarmament (VICD), established in 1978, which coordinated the work of 7 community groups, including 3 churches, the Victoria Labour Council, and local peace organisation branches such as the U.N. Association. In 1982, the VICD included 130 members from 13 groups and a mailing list of 200 Victorians. The GVDG sponsored marches, rallies, theatre and vigils, and had frequent public meetings and film and video programs. In 1989 members of the GVDG, with others, formed the Victoria Peace Education Resource Centre (VPERC) to provide community education; in 1994, the Centre purchased from GVDG resource media and office equipment.