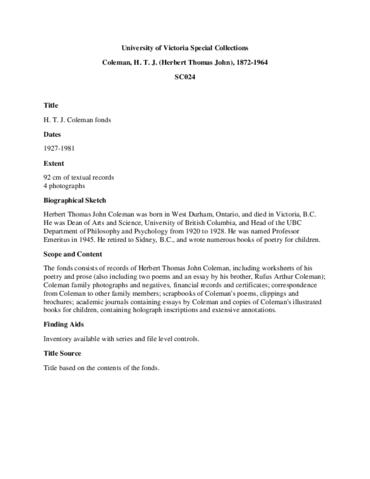 Herbert Thomas John Coleman was born in Darlington Township, West Durham, Ontario, on 20 January 1872. He obtained his B.A. from the University of Toronto and later his Ph.D. from Columbia University. He taught high school in Spokane, Washington and was professor of education at both Colorado State University and the University of Toronto. He became a U.S. citizen in 1899 but returned to Canada to teach at the University of British Columbia, serving from 1920 to 1928 as UBC's second Dean of Arts and Science; during the same period he was also Head of the Dept. of Philosophy and Psychology at UBC. In 1923 Coleman became provisional Director of the post-graduate course in Teacher Training at UBC. He resigned as Dean in 1928 and thereafter devoted his time to teaching and writing poetry and essays. He also collaborated with Alan Thompson on the song, "The New Hat". By 1940 he had become UBC's "ungarlanded poet-laureate", and in 1945 he was named Professor Emeritus.

Coleman, his wife Grace and their daughter Alice spent many summers at Brentwood Bay near Victoria, and after leaving UBC Coleman retired to nearby Deep Cove. Coleman maintained contact with his sister Elizabeth, who lived in Vancouver, and his brother Rufus, also a teacher and poet, who lived for some years in Missoula, Montana.

Among Coleman's many books of children's poetry are All About Babies, a book of poems about baby animals, which was published by Gray's Publishing in Sidney in 1963; Cockle-Shell and Sandal-Shoon (Ryerson Poetry Chap-Books, Ryerson Press, Toronto, 1927); The Far Hills (Ryerson, 1958); Patricia Ann: The Story of a Doll (J.M. Dent & Sons, Toronto, 1936); The Poet Confides (Ryerson Chap-Books, Ryerson Press, 1928); and A Rhyme for a Penny (The Clarke & Stuart Company Limited, Vancouver, 1934). He died at age 92 on 9 June 1964 in Deep Cove.