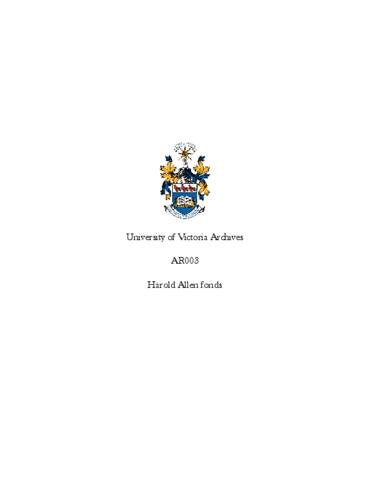 Harold Tuttle Allen was born 22 January 1902 in Montreal. In 1923 he graduated from the University of British Columbia with a Bachelor of Arts, and in 1926 was ordained by British Columbia Conference. Allen spent his career as a United Church minister, working for over 40 years in lumber mill, coal mining, and urban centers of BC. He was prominent in the New Democratic Party, and developed a widespread reputation as a man always ready to help the underdog. From 1956 to 1962 he served as the Field Secretary for the Lord's Day Alliance, fighting unsuccessfully to uphold the enforcement of the Lord's Day Act. Allen also researched and wrote on religious issues and social change. He was married to Ruby Rhoda Reilly (1903-1983). Allen died 1 November 1982.